A woman shooting heroin with her boyfriend in a car came to only to realize that her boyfriend had overdosed. She then administered CPR and Narcan with the help of police.

Narcan, also known as Naloxone and sometimes branded as Evzio, is the nasal spray form of “prescription medicine used for the treatment of an opioid emergency such as an overdose or a possible opioid overdose,” writes the Narcan website.

In the video, men approach the couple sleeping in a car. “Yo, they dead man,” one onlooker says.

They begin pounding on the glass. Eventually, the woman comes to. She has a needle with a syringe in her lap. However, her boyfriend, Dan, doesn’t move.

“Hey, does he need an ambulance?” the man filming asks.

As Dan continues to be unresponsive, the woman snaps to attention and begins administering CPR to her boyfriend as the cameraman tells her the police are coming up the street.

The police then give Dan Narcan. He becomes responsive and begins to puke.

Heroin is an epidemic in the United States and in some states, it is the leading cause of death over gun violence. The problem is particularly bad in New England, New York, Ohio, and Illinois, reports NBC News.

According to the National Institute on Drug Abuse, it is estimated that 2.1 million Americans are suffering from substance use disorders related to prescription opioid pain relievers in 2012, with an estimated 467,000 addicted to heroin. They write that there are several contributing factors, including “drastic increases in the number of prescriptions written and dispensed, greater social acceptability for using medications for different purposes, and aggressive marketing by pharmaceutical companies.” 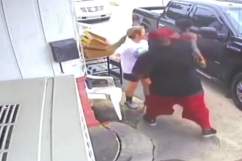 WATCH: Woman & Daughter Beaten by Couple Because of Cold Chicken at Restaurant

Read More
Drugs, Heroin, Youtube
A woman shooting heroin with her boyfriend in a car came to only to realize that her boyfriend had overdosed. She then administered CPR and Narcan with the help of police.