Adam Endel, a member of the Nevada Parole Board of Commissioners, wore a Kansas City Chiefs tie to Thursday’s hearing to decide if OJ Simpson would be released from prison.

Endel was one of four parole board commissioners to question Simpson during the hearing. He and the three other board members voted unanimously to release Simpson on parole. He could be out of prison as early as October 1.

He has been on the board since 2009 and was re-appointed in 2013, according to the parole board website. Endel previously worked for 18 years as a correctional office and caseworker. He was also the associate warden of programs at the Ely State Prison for eight years before being appointed to the parole board.

Nevada Board of ParoleAdam Endel.

Endel graduated from Central Missouri State University with a criminal justice degree, according to his Linkedin profile. He then received a masters degree in organizational management from the University of Phoenix in 2004.

Endel is originally from Missouri and posted on Facebook prior to the hearing about his plans to wear the tie.

“Maybe you should wear your Chiefs hat to the hearing…..,” a friend wrote. Endel replied, “Won’t wear the hat, but my tie will be.”

His decision to wear the tie caused a stir on Twitter, with “Kansas City Chiefs” trending worldwide. He even drew a response from his favorite team:

Simpson, a former NFL star who is in the Hall of Fame, played for the Buffalo Bills and the San Francisco 49ers during his football career.

Endel posted a selfie with his fellow commissioners prior to the hearing, but kept his Chiefs tie covered up:

Adam Endel took this selfie prior to the Simpson parole board hearing.

He also shared a photo an hour before the hearing of Simpson with now-President Donald Trump, adding “I thought this was funny….”:

According to his Twitter profile, Endel is a “big Chiefs and Royals Fan!!!” He adds, “Time for both to start winning!

Endel has been posting on social media in the days leading up to the hearing about the media circus at the parole board office in Carson City. Simpson, who is serving a 33-year sentence in a robbery and kidnapping case stemming from a plot he planned to retrieve his belongings from a sports memoribilia dealer at a Las Vegas hotel in 2008, was not at the Carson City office, but appeared via video feed from the Lovelock Correctional Center.

The parole board heard from Simpson, questioning him and then allowing him to read a statement, along with his attorney, his daughter and one of the victims, Bruce Fromong, who testified on Simpson’s behalf.

Simpson could be released from prison on October 1 and will need to abide by probation conditions set by the state. 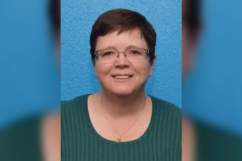 Loading more stories
wpDiscuz
1
0
Would love your thoughts, please comment.x
()
x
| Reply
Adam Endel, one of the four parole board members deciding if OJ Simpson will be released from prison, wore a Kansas City Chiefs tie during the hearing.