“Anthony Scaramucci will be leaving his role as White House Communications Director,” the emailed statement from the White House reads. “Mr. Scaramucci felt it was best to give Chief of Staff John Kelly a clean slate and the ability to build his own team. We wish him all the best.”

Sanders’ statement contradicts a report in The New York Times that Scaramucci didn’t decide to resign on his own volition. The Times reported that Scaramucci was removed from the position by President Trump at the behest of Kelly.

It’s not yet clear whether Scaramucci will surface in a position elsewhere in the administration, but ABC News is reporting that he has requested to move to the Export/Import bank.

It’s unclear who will replace Scaramucci. Sean Spicer, by one report, was seen in Sanders’ office around the time the statement was drafted.

Spotted huddling in Press Sec office (where Scaramucci statement was being drafted): Spicer. Could explain choice of "clean slate" line

Scaramucci was Communications Director for an exceptionally rocky few days. His choice by Donald Trump led to the resignation of Sean Spicer, one of the most familiar faces in the White House, and Chief of Staff Reince Priebus resigned a short time after that. Scaramucci gave an unprecedented, dramatic interview to a reporter in which he called Priebus and White House adviser Steve Bannon a series of vile names. Scaramucci’s personal life also boiled over immediately into public view when it was revealed that his second wife, Deidre Ball, had filed for divorce from him in early July while eight months’ pregnant. That revelation sparked a series of negative stories in New York tabloids.

Scaramucci is a self-made multi-millionaire financier from New York. He made his fortune in investing and hedge funds after growing up in a middle class family along Long Island.

You can read more about Scaramucci’s resignation here: 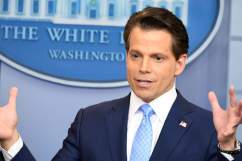