After months of searching, the remains of 5-year-old Aramazd Andressian Jr. have been located by authorities.

The Los Angeles County Sheriff’s Department confirmed in social media posts that they found his remains “based on additional leads” June 30. Detectives found his body near the Lake Cachuma area in Santa Barbara County. It’s the same area that they had searched after he was reported missing.

Andressian Jr. had been missing since April 21 when he left Disneyland in Anaheim with his father, Aramazd Andressian Sr., who has since been charged with his murder. The father has been accused by authorities of killing his son because he wanted to get back at his ex-wife after an ugly divorce filing.

1. The Father Issued an Emotional Plea for Assistance in Finding His Son

Authorities had said that the pair were last seen on video leaving Disneyland together on April 20. Before the footage of the two at the theme park, the child “was last seen on Saturday, April 15, 2017 at 8 a.m. during a custody exchange with his father at the Baldwin Park Police Department.”

A few days later on April 18, the child’s mother told investigators that she saw and spoke to her son via Skype. She was the one who reported him missing after the father and son didn’t show up for another arranged custody exchange.

After the child went missing, Andressian Sr. released a statement asking for the public’s assistance in locating his son. He claimed that the last time he saw his son was April 22 at Arroyo Park near South Pasadena.

I am desperate to find my son, Aramazd Jr., and need the public’s help. I hope and pray for the safe return of my only child, my namesake, who has been missing since last Saturday morning, April 22nd.

There has been a great deal of speculation regarding the timeline around his disappearance. The last time I saw my son was on Saturday morning, the 22nd, at Arroyo Park near my home in South Pasadena. After breakfast Aramazd Jr. wanted to go to the park before we were to meet his mother for a custody exchange at 9:00 a.m. 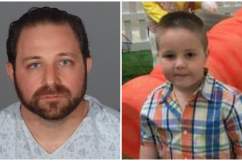 2. The Father Told Detectives He Was Knocked Unconscious

Andressian Sr. told detectives investigating the matter a complicated story about what happened when he lost track of his son.

According to KTLA 5 News, he was found passed out in a park and said the only thing he remembers is waking up “hours later” at Huntington Memorial Hospital.

“I was told that a good Samaritan found me unconscious on the ground near my car, with young Aramazd nowhere in sight,” he wrote in a statement. “I can only speculate that I must have been attacked in the park, given my unresponsive state and subsequent physical condition.”

After investigating the incident further, though, detectives said there was no evidence to suggest that he was attacked and it was unknown why he was unconscious next to his vehicle, which was soaked in gasoline.

ABC 7 News reported that police said the father has a “selective memory” when questioned about what happened to his son.

3. The Father Was Arrested & Charged With His Son’s Murder

Andressian Sr. was first brought into custody for questioning and jailed on suspicion of child abduction and child endangerment, but was released three days later.

“Regarding the arrest of suspect Aramazd Andressian Sr., South Pasadena Police Department and Los Angeles Sheriff’s Department have made the decision not to present the case to the Los Angeles County District Attorney’s Office for filing consideration at this time. Suspect Andressian has been released from custody,” the sheriff’s department wrote on Facebook.

He was finally arrested in Las Vegas on June 21 and charged with the murder of his son. On June 30, he was extradited back to Los Angeles after choosing not to contest it. According to ABC 7 News, he told authorities that his trip to Vegas wasn’t an effort to flee.

He was transported using an L.A. Sheriff’s Department airplane and was seen being ushered into the facility by deputies in handcuffs while keeping his head down. He was then brought to Men’s Central Jail in downtown L.A., where he was processed.

4. The Alleged Motive Was So the Father Could ‘Get Back at His Ex-Wife’

Aramazd Andressian Sr should automatically get the death penalty for killing his son. pic.twitter.com/ddLSP2LYdy

The child’s parents were in the midst of an ugly divorce, and it was the mother, Ana Estevez Andressian, who first contacted to police. They had a shared custody agreement, and she had previously filed a restraining order against him.

Lizarraga Law, APC, a law firm representing the father said in a post to Facebook that the request for the restraining order was denied.

Authorities are accusing the father of murdering his son “to get back at” Ana after a “tumultuous divorce.”

FacebookA search poster for the child.

The L.A. Sheriff’s Department launched a large search effort to locate the boy and searched through the father’s home and a lake — the same one he was eventually found near — but couldn’t find him.

On April 28, investigators obtained a search warrant to search the father’s home, but also came up empty and later searched the child’s grandmother’s home and “seized various items of evidence,” a news release stated.

They decided to search near the lake because investigators learned that the father spent April 21 visiting Lake Cachuma Recreation Area. But when they executed the search around the lake the first time, they came up empty handed.

A woman told CBS Los Angeles that she was “certain she saw a missing 5-year-old boy” near the lake.

“The little boy was watching my son play with his Marvel Avengers toys,” she said. “She thought the father appeared to be crying and/or had been drinking. She said the boy was sitting in the front seat.”

Loading more stories
wpDiscuz
7
0
Would love your thoughts, please comment.x
()
x
| Reply
After months of searching, the body of Aramazd Andressian Jr. was found close to Santa Barbara. He was missing since April when he left Disneyland with his dad.