Bakari Henderson, a 22-year-old Texan, was beaten to death on the Greek island of Zakynthos by a crowd after getting into an argument inside a bar. In the newly released CCTV video from a restaurant near the incident, Henderson can be seen running down a sidewalk.

His family told Austin’s KXAN that he was on the island for a photo shoot to launch a new clothing line.

Henderson, a recent college graduate from the University of Arizona, reportedly got into an argument with a security guard at Bar Code in Laganas, writes The Washington Post.

Others soon joined the altercation, which became a fistfight.

After Henderson tried to flee, the above video shows what happens next: the Texan tries to flee across a street before being caught by an attacker, who throws him into a car. The mob regroups to beat Henderson for at least half a minute.

The Daily Mail reports that the assailants used brass knuckles.

A woman finally breaks up the attack.

Henderson was pronounced dead upon his arrival to a hospital.

According to a Greek news agency, some of the attackers have been captured, all of whom were of Serbian descent. The security guard and bartender were arrested, too. 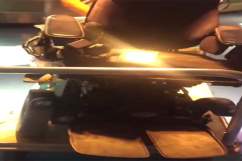 Loading more stories
wpDiscuz
16
0
Would love your thoughts, please comment.x
()
x
| Reply
Bakari Henderson, a 22-year-old Texan, was beaten to death on the Greek island of Zakynthos by a crowd after getting into an argument inside a bar.