Shocking footage recorded on a Baltimore cop’s body camera appears to show the police officer planting drugs or manipulating evidence. You can watch the video above.

According to Fox Baltimore, which obtained the video, the footage led prosecutors to drop a drug case and has sparked an internal investigation into the officer’s conduct. He has been identified as Officer Richard Pinheiro.

The 90-second clip begins with three officers in an alley. The officer’s body camera was not turned on at that point, but the cameras record the 30 seconds prior to activation without sound, the Baltimore Sun’s Justin Fenton says. Those 30 seconds appear to show the officer planting a bag of pills under trash in the alley, before he and the other officers walk out of the alley to a sidewalk nearby.

When the officer gets to the sidewalk, he then fully activates the camera, turning on the audio recorder.

“I’m going to go check here, hold on,” the officer says, before heading back down the alley where the officers had been standing. He then looks through the trash where he had just left the drugs about 30 seconds earlier and finds them in a can.

“Yo, hold up,” he calls out to the other officers, holding up the drugs.

The body camera footage shows that the incident occurred on January 24, 2017. The name of the defendant in the case has also not been released. According to Fenton, the suspect was held on $50,000 bail after he was arrested in this case. He had been offered a three-year plea deal and then was given an offer of time-served when the video was discovered, Fenton reports. But the case was eventually dropped altogether.

A trial in the case was scheduled to begin next week, Fox Baltimore reports. In an email obtained by the news station, a prosecutor writes, “I’ve passed it up and we are all appalled … something is going to happen because of this revelation.”

Charges were dropped the next day, but the same officer whose camera recorded the incident was called to testify in a different case days later, the news station reports.

“They had knowledge. They watched it and were appalled by what was on the video, and then for whatever reason made the choice to continue to call him as a witness,” Public Defender Debbie Katz Levi told Fox Baltimore.

Baltimore Police issued a statement saying, “We take allegations like this very seriously and that’s why we launched an internal investigation into the accusations. We are fortunate to have Body Worn Cameras which provide a perspective of the events as reported.”

Body camera footage led to felony drug charges being dropped against a man in Pueblo, Colorado, in a similar incident earlier this year. Joseph Cajar, 36, was facing several charges after police said they found drugs and a gun in his car following a November 2016 traffic stop, the Pueblo Chieftain reported.

But it was later revealed that the arresting officer recreated body camera video after the initial search. The newspaper reports that Officer Seth Jensen staged a search of the vehicle because his body camera was not on when the drugs were found.

That incident was under investigation by the Pueblo Police Department, the Chieftain reported. 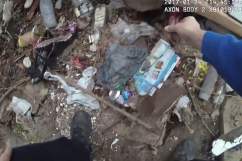