Brendt Christensen, a graduate student researcher at the University of Illinois, is accused of abducting Yingying Zhang, a visiting scholar from China.

Authorities announced the arrest on June 30 and released a detailed affidavit and press release that accuses Christensen, 28, of using his phone to access a website entitled “Abduction 101” and sub-threads that were called things like “perfect abduction fantasy” and “planning a kidnapping.”

The affidavit accuses Christensen of abducting Zhang, who had only recently arrived in Illinois from China, and who was last seen exiting a bus and then speaking to the driver of a black Saturn vehicle.

For almost a month since she vanished June 9, a massive search for Zhang was underway.

Authorities now say that Christensen admitted kidnapping Zhang and bringing her back to his apartment after spotting her at the bus stop and offering her a ride.

Tragically, the FBI believes that Zhang, an environmental engineer who was studying crop production in the U.S., is dead. However, authorities have not released any details about how they believe she died, and they say she is still missing.

The disappearance of the young scholar, who was only 26, moved many in the United States and China, and the community rallied around Zhang’s father, who arrived from China to help look for his daughter.

The big break for authorities in the case came when they obtained surveillance video that showed Zhang getting into the black Saturn vehicle on June 9, the day she went missing. The affidavit says that Zhang was supposed to be looking at an apartment she wanted to lease, but she never showed up.

Painstaking detective work led authorities to a black Saturn owned by Christensen, which they said in the affidavit contained the same damage and sunroof seen on the vehicle in the video.

On June 15, Christensen was interviewed at the FBI’s Champaign office. According to the affidavit, authorities allege that he “admitted to driving around the UI campus when he observed an Asian female with a backpack standing at a corner appearing distressed. Christensen claimed that he drove up to the Asian female, who relayed she was late to an appointment. Christensen stated that he offered the Asian female a ride. The female entered his vehicle and attempted to show Christensen where she needed to go through her cell phone map app.”

Christensen allegedly claimed that “he believed he made a wrong turn because the female became panicked.” He claimed that he then let the female out of the vehicle in a residential area a few blocks away from where he picked her up.

A family obit from 2013 indicates that Christensen was married.

Christensen, on LinkedIn, said that he is a PhD Student Researcher at the University of Illinois at Urbana-Champaign, and he has worked there for 3 years and 7 months. That’s the same university where Zhang was a visiting scholar.

Christensen wrote on LinkedIn: “I am a PhD candidate in experimental condensed matter physics at the University of Illinois at Urbana-Champaign. Currently, I fabricate nanoscale-level devices and perform electrical measurements on them in order to discover new things about mesoscopic physics. These measurements are done with a variety of devices; most notably probe stations and cryogenic systems. Along the way, I utilize an assortment of programs and skills, such as Python, LabVIEW, electron-beam lithography, atomic force microscopy, and much more.”

He is also a graduate of the University of Wisconsin-Madison, where he majored in physics, and he is from Stevens Point, Wisconsin, according to his Facebook page.

You can read more about Brendt Christensen and read the affidavit in the case: 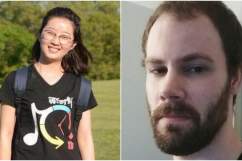