Representative Buddy Carter of Georgia said on live television today that he wants to “snatch a knot” in Alaska Senator Lisa Murkowski’s “ass” during an appearance on MSNBC. On Tuesday, Murkowski was joined by Maine Senator Susan Collins as the only two Republicans to vote against debating the repeal of Obamacare.

Here it is: GOP Rep. Carter, asked about Murkowski: "Somebody needs to go over there to that Senate and snatch a knot in their ass." @MSNBC pic.twitter.com/1CVcENn9Kq

While on MSNBC, Carter was visibly frustrated by Murkowski’s vote against the debate.

“Let me tell you, somebody needs to go over there to that Senate and snatch a knot in their ass,” Carter said. “I”m telling you, it has gotten to the point where… How can you say I voted for this last year, but I’m not going to vote for it this year. This is extremely frustrating for those of us who put so much into this effort.”

The term “snatch a knot” is a slang term for one threatening to beat someone up.

Carter wasn’t the only Republican to express disappointment in Murkowski. President Donald Trump called her out on Twitter, telling her that she “really let the Republicans, and our country, down yesterday. Too bad!”

Senator @lisamurkowski of the Great State of Alaska really let the Republicans, and our country, down yesterday. Too bad!

“My vote yesterday was from my heart for the people that I represent,” Murkowski told CNN today. “I’m going to continue working hard for Alaskans and focus on that.”

Collins was also criticized by a male member of the House. Rep. Blake Farenthold of Texas told a local radio station that, “If it was a guy from south Texas, I might ask him to step outside and settle this Aaron Burr-style.” Collins said on Tuesday that she had never been challenged to a duel in her 20 years in the Senate.

In a statement posted on Twitter, Murkowski said she voted “no” because she wanted to give health care another chance to go through the committee process that bills typically move through before reaching the Senate floor.

Later, a hot mic in the Senate caught Collins calling Farenthold “so unattractive it’s unbelievable.” Collins later told CNN that she apologized to him and she accepted his apology for the “Arron Burr-style” comment.

The 59-year-old Carter represents Georgia’s first Congressional District and was elected to his first term in November 2014. He’s on the House Committee on Energy and Commerce and he voted for the House’s American Health Care Act. 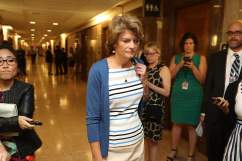 Snatch a Knot Meaning: What Was Buddy Carter Threatening to Do to the Senate?