A video filmed by Rep. Clay Higgins at the Auschwitz-Birkenau Memorial and Museum has drawn strong criticism and has been condemned by the museum itself.

In the video, the Republican congressman from Louisiana films himself taking a tour of the concentration camp in Poland that was once used by Nazis in World War II to kill almost 1 million Jews.

“A great sense of dread comes over you in this place,” Higgins says in the video. “Man’s inhumanity to man can be quite shocking.”

Higgins, who serves on the U.S. House Homeland Security Committee, uses Auschwitz as an example to say that “the United States is more accessible to terror like this, horror like this.”

“It’s hard to walk away from the gas chambers and ovens without a very sober feeling of commitment, unwavering commitment, to make damn sure that the United States of America is protected from the evils of the world,” he says.

In another part of the video, Higgins films himself in one of the gas chambers and explains how Nazi soldiers would drop cyanide into the showers from above, killing those inside “within 20 minutes.” He adds that it’s reasons like that which show “why homeland security must be squared away, why our military must be invincible.”

The five-minute video drew a response from the museum, which said that it should never be used as a “stage.” Instead, the museum encourages visitors to be quiet and respectful, even posting a picture to Twitter of the sign that greets visitors.

“You are in a building where the SS murdered thousands of people,” the sign reads. “Please maintain silence here: remember their suffering and show respect for their memory.”

Everyone has the right to personal reflections. However, inside a former gas chamber, there should be mournful silence. It's not a stage. https://t.co/AN5aA1bYEU

Higgins represents Louisiana’s 3rd congressional district and has done so since January 3. He won a runoff election against fellow Republican Scott Angelle on December 10, 2016. He’s also a law enforcement officer as a Reserve Deputy Marshal for Lafayette.

Higgins’ office hasn’t yet responded to the backlash of the video. 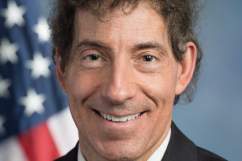 Loading more stories
wpDiscuz
2
0
Would love your thoughts, please comment.x
()
x
| Reply
A video filmed by Rep. Clay Higgins inside a gas chamber at the Auschwitz-Birkenau Memorial and Museum has drawn criticism by many.