Showtime has released the first promo video for the upcoming Conor McGregor vs. Floyd Mayweather fight. Several fan-made promo videos had been released prior, but the video above marks the first official promotional material from Showtime.

The two superstars are set to square off in the ring Aug. 26. at the T-Mobile Arena in Las Vegas, NV. The fight will be 12-round boxing match with 3-minute rounds. They will fight at 154 lbs. with 10 ounce gloves. The match will be available on Showtime PPV.

Due to the type of match, Mayweather will enter the bout as a heavy favorite. Mayweather is a five-division world champion and has a 49-0 record. He will be exiting a 23-month retirement at the age of 40 to face McGregor, according to ESPN.

The fighters will soon embark on a four day world press conference tour. The tour will have four stops and visit three countries in just four days. The press conferences will mark the first time that both fighters have been under the same roof since the fight was made official. The tour begins Tuesday, July 11 and will go to Los Angeles, Toronto, Brooklyn, and London. 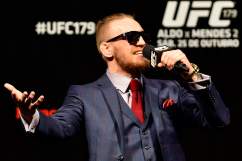