President Donald Trump arrived in Poland yesterday with his wife, Melania, and their son, Barron. The POTUS and FLOTUS were in Warsaw on Thursday where they met with Poland’s President Andrzej Duda and his wife, Agata Kornhauser-Duda.

After the arrival ceremony, President Trump shook hands with President Duda. When Trump turned to shake hands with Kornhauser-Duda, she reached past him and shook hands with Melania instead. While it does seem obvious that Kornhauser-Duda was heading over to Melania because the two men were already engaged in a handshake, the “diss” made waves on the internet anyway. The way in which it happens almost looks intentional, which is what the internet is getting a kick over today.

According to the New York Times, President Trump spoke with leaders in Poland about “radical Islamic terrorism.” He praised the country and focused on somewhat of a theme of “[defending] our civilization.”

“The fundamental question of our time is whether the West has the will to survive,” he said. “Do we have the confidence in our values to defend them at any cost? Do we have enough respect for our citizens to protect our borders? Do we have the desire and the courage to preserve our civilization in the face of those who would subvert and destroy it?” Trump asked.

In the news conference with President Duda, Trump picked up his latest round of criticism following his use of the words “pretty severe things” when discussing North Korea.

“We’ll see what happens — I don’t like to talk about what we have planned — but I have some pretty severe things that we’re thinking about. They are behaving in a very, very serious manner, and something will have to be done about it,” President Trump said.

The President and First Lady of the United States left Poland and arrived in Hamburg, Germany, a short time ago. 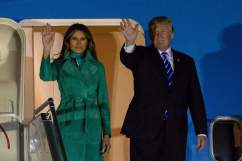 Loading more stories
wpDiscuz
1
0
Would love your thoughts, please comment.x
()
x
| Reply
Donald Trump goes to shake hands with Agata Kornhauser-Duda, but she skips his hand and shakes Melania's instead.