President Donald Trump’s first interview since his meeting with Russian President Vladimir Putin at the G20 summit in Germany wasn’t with any of the major news outlets. Instead, he sat down with Christian Broadcasting Network founder Pat Robertson for his The 700 Club show. In the interview clips already released, Trump gives a brief statement on his experience at the G20 and his hopes for Obamacare’s repeal.

Trump told Robertson that he is sitting in the Oval Office, “with a pen in hand,” waiting for the Senate to pass their health care bill. He expressed disappointment in the Senate’s ability to get a bill passed after talking about repealing Obamacare for years.

“For years, they’ve been talking about repeal-replace, repeal-replace,” Trump told Robertson. “I think they passed it 61 times, repeal and replace, but that didn’t mean anything because you had the minority, the Republicans, they didn’t have the majority so it wasn’t going to get to the President, but if it ever did, Obama wasn’t going to sign it.”

He said the previous times the Senate passed repeal bills, it “didn’t mean anything” because President Barack Obama wasn’t going to sign a bill to repeal his own signature domestic legislation.

Trump told Robertson that he is confident it will get done and he’ll be “very angry” if it doesn’t happen.

When Robertson asked if Trump thought Senate Majority Leader Mitch McConnell could get a deal done, Trump said the Kentucky Senator has “got to pull it off.”

In another segment of the interview that’s been released, Robertson asked Trump if the U.S. could trust Putin. Trump said he had a “good meeting” with Putin, and pointed out that the ceasfire in Syria they agreed upon during the meeting is still ongoing. “This has held, unlike all of the other ceasefires that didn’t mean anything,” Trump said.

Trump said it was import to have a “dialogue” with Putin and everyone else. The president said it was a “great G20… we had 20 countries.”

“I get along, I think, really fantastically with the head of every country,” Trump said. 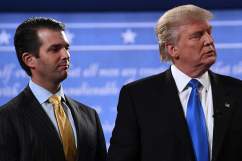 Donald Trump Jr.’s Relationship With His Father: A Timeline