President Donald Trump shook hands with Russian President Vladimir Putin on Friday at the G20 summit in Hamburg, Germany before their private, face-to-face meeting later in the day. Video released by the German government shows the two world leaders shaking hands, then Trump pats Putin on the back.

When Trump meets with Putin privately, there will only be four other people in the room with him. Secretary of State Rex Tillerson and Tillerson’s Russian counterpart, foreign minister Sergey Lavrov, will be in the room. There will also be two translators in the room, Axios notes.

The two men representing U.S. interests in the meeting are far less experienced in politics compared to their Russian counterparts. Putin has been leading Russia since 2000 and Lavrov has been Russia’s Minister of Foreign Affairs since 2004. Trump and Tillerson have less than seven months of experience in politics. However, Tillerson has met Putin in the past, having negotiated deals on behalf of his former company, ExxonMobil, in Russia.

The meeting also comes just a day after Trump again cast doubt on U.S. intelligence that Russia meddled in the 2016 Presidential election. While in Poland, Trump said he thinks Russia interviewed, but added the caveat, “nobody really knows for sure.”

In the past, Trump has spoken favorably about Putin, but has insisted that he’s never physically met him, despite going to Moscow for the 2013 Miss Universe pageant.

“I never met Putin,” Trump said in July 2016. “I don’t know who Putin is. He said one nice thing about me. He said I’m a genius. I said thank you very much to the newspaper and that was the end of it. I never met Putin.”

Trump is hoping to make a deal with Russia on several key topics, including Syria and Ukraine, sources told Axios. The site adds that Trump learned from his experience with Chinese President Xi Jinping that the hospitality he showed Xi in Mar-A-Lago didn’t show results, so he’s going to try a less personal approach with Putin.

Trump is currently on his second trip overseas as President. After his meeting with Putin, there will be more G20 receptions. The members of the “Group of 20” ate the U.S., Canada, Mexico, Russia, Argentina, Australia, Brazil, China, France, Germany, India, Indonesia, Italy, Japan, South Korea, Saudi Arabia, South Africa, Turkey, the U.K. and the European Union.

“I look forward to all meetings today with world leaders, including my meeting with Vladimir Putin,” Trump tweeted. “Much to discuss.” 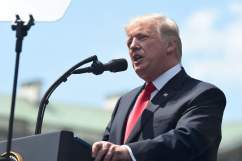 WATCH: Donald Trump Says Russia Hacked Election, But ‘Nobody Really Knows for Sure’