Floyd Mayweather filed a Tax Court petition on July 5, seeking a reprieve from the IRS on his 2015 tax liability, until after his Aug. 26 fight with Conor McGregor, according to ESPN.

Mayweather filed the petition after the Internal Revenue Service initially refused Mayweather’s request for a short-term payment plan. The IRS said that Mayweather has the means to pay the debt immediately, according to Sports Illustrated.

Mayweather doesn’t deny that he has the assets necessary to pay his 2015 tax liability, but claims that his current assets are primarily illiquid.

“Although the taxpayer has substantial assets, those assets are restricted and primarily illiquid,” the petition said. “The taxpayer has a significant liquidity event scheduled in about 60 days from which he intends to pay the balance of the 2015 tax liability due and outstanding.”

The petition also asks to reduce the penalty Mayweather recieved from not paying all of his taxes from that year. It is not known exactly how much Mayweather still owes from his back taxes, according to ESPN.

Mayweather made about $220 million from his May 2, 2015 fight against Manny Pacquiao and is expected to make a similar amount for the McGregor fight. Mayweather has not fought since beating Andre Berto in September 2015. It has been reported that he made $32 million for that fight, according to Sports Illustrated.

According to ESPN, Mayweather has earned approximately $700 million in his 49-fight professional career.

Mayweather and McGregor are set to square-off on Aug. 26 at the T-Mobile Arena in Las Vegas, NV. The fight will be a 12-round boxing match with 3-minute rounds. They will fight at 154 lbs. with 10 oz. gloves. The fight will be available on Showtime PPV.

The purse for the fight has yet to be disclosed, but it has been reported that each fighter will make over $100 million before the gate. The fight is expected to do well on pay-per-view, and it could even shatter previous records, according to news.com.au. 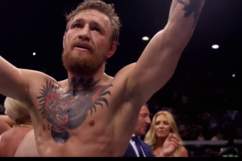 Loading more stories
wpDiscuz
0
0
Would love your thoughts, please comment.x
()
x
| Reply
Floyd Mayweather filed a Tax Court petition that asks the IRS for a reprieve on his 2015 tax liability, until after his Aug. 26 fight with Conor McGregor.