Footage captured by a security camera at Argonics Inc. in Kentucky shows the moment a goat head butted and shattered the business’ front door. Video of the strange event was shared by the business on their YouTube channel and has already garnered over a quarter million views.

The story was first reported by 9News. Employee Greg Cappeart told them that the company’s general manager came in Monday morning and found that the building’s front glass doors had been shattered.

Police were called and security camera footage was reviewed.

It was only then that the culprit was realized to be not one ruminant, but two. Multiple goats were on the scene.

Cappeart told the Daily Camera, “At first they thought [the general manager] said ghosts did it, and they thought he was a crazy person. But then he said, ‘No, it was goats. You can come watch the video. Everybody had a good chuckle over it.”

It’s unclear where he goats came from and the incident is currently being handled by insurance. It’s also unknown what the goats wanted inside, but it’s like they were merely seeing their reflections in the glass door.

Goats have charged their reflections in viral videos in the past, and that may just be the case here, too. 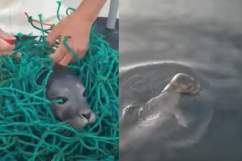