Trey Gowdy speaks during a hearing before the House Judiciary Committee June 11, 2014 on Capitol Hill in Washington, DC. (Getty)

The House Judiciary Committee on Thursday called for the appointment of a second special counsel to investigate matters relating to actions taken by members of the Obama administration.

“We are writing to you to request assistance in restoring public confidence in our nation’s justice system and its investigators, specifically the Department of Justice and the FBI,” the letter says. “We need to enable these agencies to perform their necessary and important law enforcement and intelligence functions full unhindered by politics.”

Read the full letter below:

The letter followed the House Judiciary Committee’s approval of H. Res. 446 on Wednesday, a request for documents that pertain to the DOJ’s investigation into Clinton.

Many Democrats and members of the Washington media previously called for a “special prosecutor” to investigate Russian influence on the election and connections with the Trump campaign. Not surprisingly, once you actually made the decision to appoint a special counsel, the calls for further investigations by congressional committees continued, focused on allegations that have heretofore produced no evidence of criminality, despite the fact that over a year has passed since the opening of the original FBI investigation. Political gamesmanship continues to saturate anything and everything associated with reactions to President Trump’s executive decisions, and reveals the hypocrisy of those who refuse to allow the Special Counsel’s investigation to proceed without undue political influence. It is an unfortunate state of affairs.

In the letter, members of the committee express concern that the responsibility given to special counsel Robert Mueller “is narrow in scope and many concerns arising out of the 2016 presidential election and its aftermath are not being investigated.”

Specifically, the committee wants to investigate further into “concerns” like the directive Lynch gave to Comey on the nature of the investigation into Clinton’s emails. 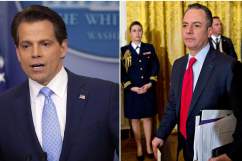 Loading more stories
wpDiscuz
6
0
Would love your thoughts, please comment.x
()
x
| Reply
The House Judiciary Committee on July 27 called for the appointment of a second special counsel to investigate matters relating to the Obama Adminsitration.