Reports are coming in of “two huge explosions” in the 14th arrondissement, or district. Is it a terrorist attack perpetrated by the Islamic State? The sounds were reported by journalist Olivier Pérou, who wrote:

However, it has since been reported by Saskya Vandoorne‏ of CNN that the sounds were firecrackers.

It was nearly 1 a.m. when the sounds were reported in an area that includes the Cité Internationale Universitaire de Paris. Other tweets from Parisians about the explosive sounds came, too. Some tweeters also said it sounded like it came from the neighboring 15th arrondissement.

Last week the Islamic State was encouraging its lone wolf operatives in France to carryout a Bastille Day attack on the anniversary of the Nice attacks. 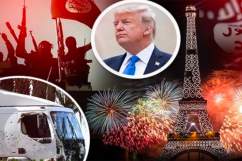 Read More
Paris, Terrorism
wpDiscuz
1
0
Would love your thoughts, please comment.x
()
x
| Reply
Reports are coming in of "two huge explosions" in the 14th arrondissement. Is it a terrorist attack perpetrated by the Islamic State?