Amid controversy about his role in President Donald Trump‘s administration, Attorney General Jeff Sessions spoke out on his relationship with the president during an exclusive interview with Fox News’ Tucker Carlson on Thursday.

Sessions, who was in El Salvador discussing gang violence, said he’s not going to step down from his role unless he’s asked to do so.

“I serve at the pleasure of the president,” Sessions said. “If he wants to make a change, he can certainly do so. I would be glad to yield in that circumstance.”

Watch the full interview with Sessions in the video below:

The interview comes after Trump has publicly trashed his attorney general mostly for recusing himself from the ongoing Russia investigation into his presidential campaign.

“Sessions should have never recused himself,” Trump told the New York Times. “And if he was going to recuse himself he should have told me before he took the job and I would have picked somebody else.”

So why aren't the Committees and investigators, and of course our beleaguered A.G., looking into Crooked Hillarys crimes & Russia relations?

Ukrainian efforts to sabotage Trump campaign – "quietly working to boost Clinton." So where is the investigation A.G. @seanhannity

Sessions said that the things Trump’s said about him are “hurtful,” but he respects his right to have them.

“It’s kind of hurtful, but the president of the United States is a strong leader, he’s determined to move this country in the direction he believes it needs to go to make us great again,” Sessions said. “He’s had a lot of criticisms and he’s steadfastly determined to get his job done and he wants all of us to do our job and that’s what I intend to do.”

Sessions also spoke about recusing himself from the Russia investigation and said that he “understands Trump’s feelings about it,” adding that it’s “been a big distraction for him.” But reiterated that he made the right decision in doing so. 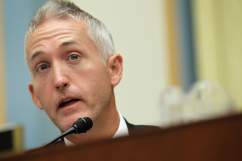