Transcripts of Justine Damond’s two 911 calls to Minneapolis police right before her shooting death show she told police she heard a woman yelling for “help” and feared the woman was being sexually assaulted.

The 911 operator repeatedly assured Justine that “help” was on the way.

Minneapolis police released transcripts, but not audio, of Damond’s 911 calls to police. Those calls led Officers Mohamed Noor and Matthew Harrity to respond to Justine’s home. Damond then went outside and approached the officers’ squad car and, state investigators say, Harrity told police that Noor, 31, then shot and killed Damond, firing through the driver’s side window of the police cruiser. Harrity allegedly told state investigators that he heard a loud noise right before Noor fired; it’s not clear what it was, but dispatch audio showed there was a report of “aerial fireworks” in the area that night.

Damond, 40, a yoga teacher and spiritual healer from Australia, was carrying only a cell phone. The officers did not have their body cameras turned on.

Here’s the transcript of Damond’s first 911 call that night:

Police released a document showing that Mohamed Noor has had three complaints against him, two of which are open. The document doesn’t detail what they are about; Noor also has a pending federal complaint against him by a social worker who alleges he and other officers unconstitutionally hospitalized her after she called 911 multiple times.

Damond was in her pajamas when she was shot, according to The Minneapolis Star-Tribune.

Noor has declined to be interviewed by the state agency investigating the shooting death, which has sparked outrage in Minneapolis and Australia, where Damond was from.

Her family – including her anguished fiancée, Don Damond, insisted from the start that Damond, 40, was the person who called 911 in the first place. The 911 call transcript bears that out.

“Hi, I’m, I can hear someone out the back and I, I’m not sure if she’s having sex or being raped,” Damond tells the 911 operator.

She provides her address.

“And there’s a (inaudible) out the back, yup, yup. And I think she just yelled out ‘help,’ but it’s difficult the sound has been going on for a while, but I think, I don’t think she’s enjoying it. I think it’s, I don’t know.”

The operator assures Justine, who also went by the name Justine Ruszczyk, that “I already got a call started and help on the way.”

The dispatcher asks whether Justine heard a “female screaming,” to which Justine responds, “Yeah. It sounds like sex noises, but it’s been going on for a while and I think she tried to say help and it sounds distressed.”

The operator again tells Damond that “we’ve already got help on the way” and “officers should be there soon.”

Justine called a second time at 11:35 p.m. You can read that transcript here:

She was asked the nature of the emergency.

“Hi, I just reported one, but no one’s here and was wondering if they got the address wrong.”

She gives her address and name.

“Yes, along behind the house.”

The operator insists, “Yup, officers are on the way there.”

You can read more about Mohamed Noor here: 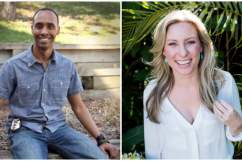