A press conference with updated information about the murders of four men has been scheduled to be held in Doylestown, Pennsylvania.

Additional information on the mysterious case is expected to be delivered by authorities at 2 p.m. EDT on Friday.

Watch the video at the top of the page for the full press conference.

Earlier in the day, Cosmo DiNardo and accomplice Sean Kratz were formally charged by the Bucks County District Attorney’s Office for conspiring and committing the murders of four men who were reported missing last week.

Bucks County District Attorney Matthew D. Weintraub said in a press conference late in the evening Wednesday that human remain remains were on a property where DiNardo lived in Solebury, about 12-feet deep.

At the press conference Friday, he said that three of the bodies were located underneath an old oil tanker that had been converted into a “cooker” of some sort. They found three of the bodies there, but another one was located a lengthy distance away on the top of a “mountain” on the property, Weintraub said. 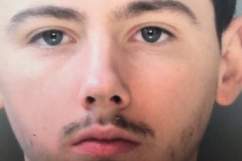 Loading more stories
wpDiscuz
0
0
Would love your thoughts, please comment.x
()
x
| Reply
Police in Bucks County, Pennsylvania are providing an update on the murder case in Bucks County. Cosmo DiNardo and Sean Kratz have been charged in the case.