Getty The US clergyman and civil rights leader Martin Luther King addresses, 29 March 1966 in Paris' Sport Palace the militants of the "Movement for the Peace". "Martin Luther King was assassinated on 04 April 1968 in Memphis, Tennessee. James Earl Ray confessed to shooting King and was sentenced to 99 years in prison.

Hidden among the JFK documents just released by the National Archives are a series of documents about Martin Luther King Jr.’s assassination. The National Archives’ servers appear slammed and the documents are very large (with some compressed files being 2 GB or more), but lists of the contents for each file are quickly viewable.

Getty28th August 1963: President John F. Kennedy in the White House with leaders of the civil rights ‘March on Washington’, including MLK.

Here is a list of some of the MLK files that are included among the JFK files just released. Because these documents must be downloaded before they can be viewed, and the servers are running slow, it’s not yet known what these documents contain, and there may be more MLK-related documents than found in this list. We’ll add to this list as that information becomes available:

This is a developing story. More details about what is in the files will be added.

Learn how to access the files in Heavy’s story below: 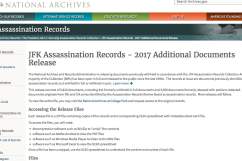 JFK Assassination Documents Released Early: How to View Them