Getty The exterior of the Nationals Park before a game earlier this season. The venue will host the 2018 MLB All-Star Game.

With the 2017 All-Star Game making its first-ever appearance at Marlins Park in Miami, the focus will soon shift to next year’s version of the Midsummer Classic.

That game and the surrounding festivities will be in the nation’s capital for the first time since 1969.

The 2018 MLB All-Star Game will travel to Washington D.C. to be hosted at Nationals Park, which opened in 2008. Since it opened almost a decade ago, the Nationals have hosted potseason games during three seasons — 2012, 2014 and 2016 — after winning the National League East title.

In recent years, the area around Nationals Park has been re-developed to make it quite the place to watch a baseball game.

Washington Post columnist Thomas Boswell wrote in September 2016 that the area around the ballpark saw extremely slow progress at the beginning, but the continuous construction work in recent years to make the area a top-of-the-line district to spend time in has worked.

Boswell wrote that the re-development project started over 12 years ago and has transformed “a blighted section of the city into a riverfront showpiece.”

Of course, that didn’t come without some controversy, as Nationals Park cost taxpayers in D.C. a sum of $670 million. But the return on investment has been worthwhile and even “surpassed expectations,” Boswell wrote.

The exact date of the game hasn’t yet been determined, but it will be “a Tuesday in July,” as the All-Star game typically is.

It may be the first time the MLB’s All-Star Game will make an appearance at Nationals Park, but it won’t be the inaugural time it’s hosted another form of an all-star game.

Just last month the ballpark hosted The Congressional Baseball Game for Charity, which pitted Democratic members of Congress against Republicans. The game took a special meaning when just two days prior, Rep. Steve Scalise of Louisiana was shot and seriously injured while practicing for the game with his fellow Republicans.

Scalise has undergone multiple surgeries since the incident and remains in “serious” condition at an area hospital. 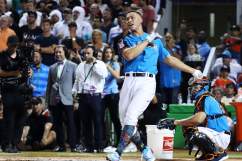 Read More
Baseball, MLB
Follow Heavy ↓
wpDiscuz
1
0
Would love your thoughts, please comment.x
()
x
| Reply
With the 2017 MLB All-Star game here, the focus will soon switch to next year's festivities. Find out where the All-Star Game will be played and when.