It’s been two days since National Hot Dog Day and now we have to celebrate another institution of the American diet. July 21 is National Junk Food Day!

True, junk food earned that moniker because it’s bad for your health, but most Americans still enjoy it on a daily basis. Today, we get to celebrate all kinds of junk food, not just Oreos or chocolate chip cookies.

Here’s a look at the history of junk food, as well as some unique facts.

according to National Day Calendar, there is no known origin for National Junk Food Day. It’s a relatively new holiday though. It was mentioned by the Huffington Post in 2009 as taking place in August 2009. Even at that point, the site noted that the origins of the holiday were unclear.

A blogger’s 2008 post also mentions it, linking to Holiday Insights. Of course, that sight offers little insight, pointing out that there’s no record of an Act of Congress to create a real “National Junk Food Day.”

If you want to stop craving junk food, one way could be making sure you get enough sleep. As HealthDay News reported in 2012, a study found that the brain reward center of sleep-deprived volunteers were “activated” when they saw pictures of unhealthy foods.

“We found regions associated with reward and motivation — those that are involved with addiction and pleasure-seeking behaviors — were more strongly activated in the short-sleep phase,” Marie-Pierre St-Onge, a research associate at St. Luke’s Roosevelt Hospital Center and an assistant professor at Columbia University’s Institute of Human Nutrition in New York City, told HealthDay News.

“It makes sense that when you are fatigued, your body would want calorie-dense foods that give you quick energy,” Samantha Heller, clinical nutrition coordinator at the Center for Cancer Care at Griffin Hospital in Connecticut, told HealthDay. “In an evolutionary sense, doing so would provide an advantage because you do get a momentary lift when you eat.”

Other studies have also shown that exhaustion can make a person crave junk food.

“What our studies showed was that the amount of sleep women have — and how well they sleep — is linked to the foods they eat and their risk of weight gain and poor mental health,” Michelle Blumfield, a dietitian at Monash University told the Huffington Post Australia in May 2016.

IF you’re hoping to escape junk food and looking for a beautiful place to go, The Republic of Venuatu in the South Pacific is the place to go. The small archipelago with less than 300,000 inhabitants made headlines earlier this year when its Torba province banned all Western junk food to improve the health of its 10,000 residents.

“At the moment we have an infiltration of junk food from overseas,” Father Luc Dini, a community leader, told the Guardian in February. “It is easy to boil noodles or rice, but they have almost no nutritional value and there is no need to eat imported food when we have so much local food grown organically on our islands.”

The province is the most isolated part of the country, but Dini believes that its farmers make more than enough healthy, natural foods for its residents.

“In other provinces that have adopted western diets you see pretty young girls but when they smile they have rotten teeth, because the sugar has broken down their teeth,” Dini told the Guardian. “We don’t want that to happen here and we don’t want to develop the illnesses that come with a western junk food diet.”

As The Telegraph notes, the nine most obese countries or territories in the world are all in the South Pacific. These include American Samoa, Nauru, the Cook Islands, Tokelau, Tonga, Samoa, Palau, Kiribati and the Marshall Islands. 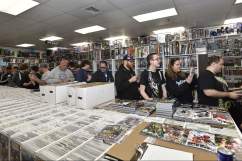 A 2012 YouGov Brand Index poll found that Ritz Crackers, which are made by Nabisco, is America’s best-perceived snack brand. Of the 5,000 people who responded, 55.2 percent had a positive view of Ritz Crackers. Lay’s potato chips followed in second with 52.1 percent, while Doritos, Fritos and Orville Redenbacher rounded out the Top 10.

Notably, Lay’s, Doritos and Fritos are all made by the same company – PesciCo subsidiary Frito-Lay. Tostitos and Cheetos, also made by Frito-Lay were in the top 10.

A March 2017 YouGov Brand Index poll found that just one snack brand was among the top 20 best perceived brands by fathers. M&M’s, made by the Mars Company, came in 10th with a 41.1 index score. 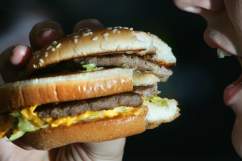 The fast food you get at McDonald’s, Taco Bell, Burger King and other fast food chains is also considered junk food. A Franchise Help Fast Food Industry analysis published earlier this year found that fast food sales in the U.S. reached $200 billion in 2015. By comparison, it was just $6 billion in 1970 and the industry expects a 2.5 percent annual growth for the next few years. Global fast food sales reached $570 billion.

A recent report from the USDA’s SNAP (Supplemental Nutritional Assistance Program) found that the top purchases for households that use food stamps are soft drinks. “Sweetened beverages” make up 10 percent of the total food stamps dollars spent on food, the study showed.

Critics have tried and failed to get the USDCA to change SNAP to promote healthy diets, and they have blamed food lobbyists for their failures. But others suggest that the study shows that, overall, soft drinks and junk food is making up too much of the American diet.

“Sweetened beverages are a common purchase in all households across America,” Kevin Concannon, the former U.S.D.A. under secretary for food, nutrition and consumer services, told the New York Times in January. “This report raises a question for all households: Are we consuming too many sweetened beverages, period?”

Loading more stories
wpDiscuz
0
0
Would love your thoughts, please comment.x
()
x
| Reply
Today is National Junk Food Day, when we celebrate eating all the junk food that's not good for us. Here's a look at the history of the holiday and unique facts.