Obdulia Sanchez is accused of killing her own sister in a car crash in California while streaming a graphic Instagram video that she allegedly narrated with comments such as, “I killed my sister, but I don’t care.”

The crash killed Sanchez’ sister, Jacquelin, 14. Another teenager, Manuela Seja, also 14, suffered a non life-threatening injury during the crash, which occurred in Los Banos, California on July 21. Sanchez is accused of being under the influence while driving and streaming on social media.

Obdulia was sentenced to at least six years in prison for the crash, telling the court, “I don’t want to go to prison, but I deserve whatever punishment I receive.”

The Instagram video kept streaming after the crash too, capturing its graphic aftermath as Sanchez allegedly spoke to the camera. You can watch the video below, but be aware that it’s disturbing. On Facebook, Obdulia posed with a gun in her profile picture and called herself a “psycho” and “homegurl.” She says she’s a former model who lives in Stockton, California and is originally from San Jose. Known as “Lula,” Obdulia had just graduated from high school.

The parents of both Obdulia and Jacquelin have spoken out to ABC30 and say Obdulia needs help. “I don’t know how to feel. My one daughter killed my other daughter,” the father of both victim and suspect said to the television station’s Sontaya Rose.

1. Sanchez Is Accused of Saying ‘I Killed My Sister’ in the Video, Which Circulated Online

YuTubeA scene from the disturbing video.

The horrific video is very disturbing and shows the dead girl lying on the ground as her sister speaks to the camera.

According to Fox 40, “Investigators are looking into the graphic video that may have been filmed by Obdulia Sanchez prior to and during the fatal crash. The live video, originally posted to Instagram, was circulated on social media.”

In the video, Sanchez, 18, allegedly says, according to Fox 40, “Jacquelin, please wake up. I f****** killed my sister, OK? I know I’m going to jail for life.” She also allegedly says, “I love my sister… this is the last thing I thought was going to happen to us.” The video starts with a normal driving scene before chaos results.

Here’s a version of the video with the victim’s face blurred out:

The extremely disturbing original and unedited video shows the dead teen’s body on the ground after the crash. It’s still circulating on YouTube and Facebook. However, be aware that it’s very troubling to watch.

There’s also an earlier video from inside the car before the crash.

In an interview with ABC30, Obdulia’s father, Nicandro Sanchez, said, “It’s an accident. It happened that way. Who knows why?”

The television station said both parents believe Obdulia needs “help,” with the father adding, “I think she doesn’t know what happened. What I think is she knows she’s done something wrong. Because she knows, and that’s what I feel. She feels bad for herself, but she killed her own sister.” (Note: The sister’s name was given by most sites as Jacqueline initially, but local news reporters who spoke to the family now say it’s Jacquelin.)

2. The Car Rolled Into a Barbed Wire Fence & an Earlier Post Spoke About Driving While on Snapchat

Police accused Sanchez of causing the crash. ABC30’s Sontaya Rose reported that “Sanchez is refusing to talk to CHP investigators about Friday’s deadly crash near Los Banos. Investigators say they asked her what happened and read her her Miranda Rights. She did not answer any questions. Officers say the suspect had picked up a friend in Fresno (third person in crash, backseat passenger- who survived) and was heading back to Stockton. Right now, it’s unclear what the suspect may have been drinking/using at the time of crash.” The reporter also posted an earlier photo (above) that carries the caption, “When you almost crashed because you’re on Snapchat.”

Obdulia Sanchez was “under the influence when she rolled her car over, into a barbed wire fence and then a field,” police say, according to ABC30. Fresno Bee reported that the victim, Jacquelin Sanchez, “wasn’t wearing a seatbelt when she was ejected through the back window of a white Buick Century as it crashed and rolled over off the south end of Henry Miller Road, east of Mercey Springs Road.”

According to The Fresno Bee, Obdulia Sanchez is accused of over correcting a turn.

“The driver over-corrected the turn, which caused the vehicle to swerve across both lanes, crashing through a wire fence and overturning into a field south of the road,” the newspaper reported.

Police initially had not yet confirmed the video’s authenticity but were investigating it, according to The Fresno Bee. However, Buzzfeed reports, police now say they are “absolutely” using the video in the case.

3. Sanchez’ Facebook Profile Picture Shows Her With a Gun & She Refers to Herself as a Psycho on the Page

On Facebook, Obdulia Sanchez’ profile picture shows her with a gun.

Other photos show her in a bikini. In one recent post, she called herself a “psycho,” writing, “My friend gon ask me: ‘why you single b*tch?’ My resonse (sic): ‘B*tch I’m f*cking phsyco (sic).’ I thought you knew……..”

She recently posted about her 18th birthday, using a racial slur. “BIG 18 in April ;) Party Party Party like a (slur edited out) just got out of jail. Hml on my 18th BDay. April 5th.”

In another post, she wrote, “I get locked up and (racial slur edited out) get girlfriends and go back to they babies mamas. Lmfao Weak as’ f*cckkk.”

Although many people are criticizing Obdulia online, there is a Facebook group supporting Obdulia.

4. The Victim Was About to Celebrate Her Quinceanera & a GoFundMe Site Was Established in Her Name

The teen who died in the crash was about to reach a major life moment.

According to ABC30, “Family members confirm the video was shot by Obdulia Sanchez. They say the victim, Jacquelin Sanchez of Stockton, was supposed to celebrate her Quinceanera Sunday.”

Family members have established a GoFundMe site in the victim’s memory.

“The family Estrada is raising money for the lost of our fellow member… We would love if anyone could contribute for the cost of the funeral and services. It breaks our heart to find out she passed away two days ago, while doing the preparation for her Quincenera. Any amounts of money would be acceptable… I appreciate the time and love of all of your donations. God bless every single person on hear and prayers to Jacqueline..RIP BEAUTIFUL..” the site says.

People on social media expressed horror after watching the disturbing video. Others expressed anger toward Obdulia Sanchez and social media culture, and said the case highlights the dangers of being on a cell phone while driving.

Mary Hernandez, the woman who reposted the video stream, sending it viral, shared the GoFundMe page and wrote on Facebook, “You all have seen the video, let’s help her family lay her to rest !” She told Buzzfeed the video had 700,000 views on Facebook before the platform took it down. She says it was sitting on Instagram for 19 hours before she reposted it. “I think this video can get a lot of people to think twice about using their phones while driving now,” she said to Buzzfeed.

Hernandez wrote on Facebook, “The news now has the video, I’m not sending it out anymore. Stop asking me stop adding me. kThanks.” 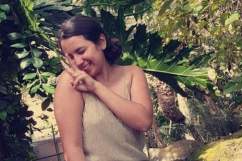 5. Obdulia Sanchez Is Now Facing Serious Charges & Her Lawyer Says She Was in Foster Care & a Previous Victim of Human Trafficking

Sanchez, 18, is in serious trouble with the law. “Obdulia Sanchez was booked into the Merced County Jail on suspicion of DUI and vehicular manslaughter after Friday’s crash north of Los Banos,” The Associated Press reported.

she has pleaded not guilty to the charges.

Obdulia Sanchez was arraigned today on charges of DUI and gross vehicular manslaughter for crash that killed her younger sister. pic.twitter.com/4P4IQQBzWm

Sanchez is accused of being combative after the crash, the Fresno Bee reported. “Following the crash, the driver was detained by law enforcement and led into an ambulance after being agitated and combative, screaming that her sister was dead as officers tried to calm her down,” the newspaper reported.

Obdulia’s lawyer says people shouldn’t rush to judge her. “It’s very unfortunate that so many people would rush to judge Ms. Sanchez in this case based on a few minutes of a video clip when she’s a very young 18-year-old woman,” he said. “They’ve never walked a single step in her shoes. They don’t know that she’s been a foster child, they don’t know that she’s been a victim of human trafficking.”