Connie Bisbee is the Chairman of the Nevada Board of Parole Commissioners. She has held that position since February 2009. She oversaw O.J. Simpson’s parole hearing on Thursday, July 20, 2017. Bisbee along with three other board members, including Commissioner Tony Corda, Commissioner Susan Jackson, and Commissioner Adam Endel, decided to grant the former NFLer parole.

Bisbee graduated from Troy State University in Alabama with a Masters Degree in Counseling and Human Development and a Bachelors Degree in Criminal Justice. In the year 2000, Bisbee got her license to become a Alcohol/Drug Counselor, according to the Nevada Board of Parole Commissioners website.

Before moving to Nevada, Bisbee lived in Florida and worked as aJudicial Services Director. She has also served in the United States Air Force, according to the aforementioned website.

Simpson was eligible for parole this year. He had served the past eight years at the Lovelock Correctional Center in Nevada after being found guilty on kidnapping, robbery, and burglary charges. If all goes according to schedule, Simpson could walk free as early as October 1, 2017.

“Mr. Simpson, you are getting the same hearing as everyone else gets. I want to make that clear from the get-go,” Bisbee said to Simpson, making sure to acknowledge the media frenzy surrounding today’s hearing. Simpson, who is attending the hearing by way of video-conference, chuckled. Simpson himself later referred to the “media circus” surrounding the hearing.

Each member of the parole board got an opportunity to ask Mr. Simpson questions before taking time to discuss their notes and making a decision.

The board deliberated a fairly short amount of time before each member stated their decision. Each of the parole board members agreed that Simpson should be granted parole. The announcement was made around 12:00 p.m. local time. 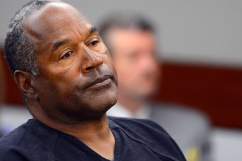 Loading more stories
wpDiscuz
3
0
Would love your thoughts, please comment.x
()
x
| Reply
Connie Bisbee is the Chairman of the Nevada parole board. She is overseeing O.J. Simpson's parole hearing on July 20.