If you’ve ever been to St. Maarten, you’re probably aware of the strip of beach that sits in front of the runway at Princess Juliana Airport. If you’ve never been to the Caribbean island, there’s a chance that you’ve seen some of the videos of huge airplanes that fly directly over people on the beach. Many will head to the area with their cameras ready as the planes are extremely low as they take off and land.

According to TMZ, one eager thrill-seeker from New Zealand decided to take the experience one step further. The 57-year-old woman held on to a fence at the edge of the runway, preparing for a plane to take off. However, as the plane’s engines roared to life, the force was too powerful for the tourist. She couldn’t hold on any longer and was thrown backward directly into a concrete barrier. Although people nearby rushed over to try to help the woman, TMZ reports that “it appears she died on impact.”

There are numerous warning signs in the area that are meant to alert tourists to the dangers of being close close to the powerful engines of jet planes.

Saint Maarten Police released the following statement after the incident.

‘The landing and taking off of all types and size of aircrafts at the international airport of Saint Maarten is well known world wide as major tourist attraction. Many tourists come to the island to experience the thrills of the landing of approaching aircraft’s flying low above their heads and the holding on to the airport fence and standing in the jet blast of large aircraft’s taking off. Doing this is however extremely dangerous. The airport authorities and other local authorities have taken all necessary measures such as the placing of signs to warn the general public not to stand in the path of the jet blast of a departing aircraft because of the danger involved. The local authorities are urging the general public and mainly visitors to the island to adhere to the warning signs that are placed at that location to avoid serious injuries which can ultimately lead to the loss of life.”

The video below shows people standing behind a plane that is preparing for takeoff. It is clear to see the force of the engines, even from a ways behind the fence.

You can see some of the crazy airplane footage shot by folks at Princess Juliana Airport over the years in the various videos below.

As you can see in the following video, holding on to a fence whilst planes take off is something that other tourists have done and many continue to do.

Back in 2012, a girl, believed to be in the same area as the tourist who passed away, was blown by a plane’s engines. Someone who had been filming the people holding on to the fence caught footage of the girl being flung backward. She was rocketed into a cement barrier but, according to TMZ, she survived.

You can see a video of that incident below. Please be advised, the footage may be hard to watch for some. 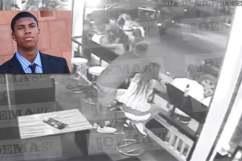 Loading more stories
wpDiscuz
2
0
Would love your thoughts, please comment.x
()
x
| Reply
A beachgoer in St Maarten was killed while holding onto a fence during a plane's take off at Princess Juliana Airport.