Getty Ray Phiri of Sitmela performs on stage during the Standard Bank Joy of Jazz 2007 n on August 25, 2007 in Johannesburg, South Africa.

Famous South African jazz musician Ray Phiri died in a hospital in Nelspruit Wednesday morning, according to SABC. Times LIVE reported that Phiri died at the age of 70 after a two-month battle with lung cancer.

Family spokesperson Paul Nkanyane confirmed Phiri’s death to TshisaLIVE and said that singer and guitar player passed at around 3:30 a.m., surrounded by family and friends.

Phiri was born in Mpumalanga, where he grew up dancing to his troubadour father’s puppet shows. In 1962, he danced for the legendary Dark City Sisters. Through that gig, he was able to save enough money to go to Johannesburg.

Phiri was a founding member of soul group the Cannibals in the 70’s. The band played a Stax Records-influenced style of township funk, according to ALLMUSIC. After the Cannibals disbanded, Phiri formed the group Stimela. Stimela achieved critical and commercial success with gold and platinum-selling albums like Fire, Passion and Ecstacy (1991) and Look, Listen and Decide (1992).

Phiri’s celebrated single ‘Highland Drifter’, released at the height of Zimbabwe’s struggle for independence, was banned by the South African Broadcasting Corporation, and his song “Whisper in The Deep” was banned from radio but still had massive sales, according to ALLMUSIC.

Phiri and Stimela performing “Whispers In The Deep” in 2010:

In 1996, Paul Simon asked Phiri to be a part of his successful but controversial Graceland project. Graceland went on to win Album of the Year at the 1987 Grammy Awards. Phiri also collaborated on Simon’s Rhythm of the Saints album. Phiri performed with Simon on stages such as Central Park and Madison Square Garden on the album’s subsequent tour. Phiri also performed for Simon’s Graceland anniversary tour in 2012.

After Graceland, Phiri continued to work with Stimela and made frequent guest appearances with other African and American artists, while also attempting to launch a solo career. In 1990, he was signed to major French record label Barclay. 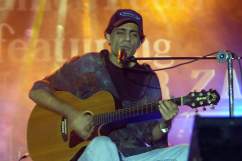 Aamir Zaki Cause of Death: How Did The Famous Guitarist Die?