Six months and one day after President Donald Trump took officer, Sean Spicer has resigned from his role as the White House Press Secretary.

According to The New York Times, Spicer decided to leave the White House because he “vehemently” opposed the hiring of New York financer Anthony Scaramucci as the White House Communications Director.

Spicer tweeted that he will stay on as press secretary through the end of August.

An anonymous source familiar with the situation told The Times that Trump had offered Scaramucci the position at around 10 a.m. on July 21 and “requested that Mr. Spicer stay on, but Mr. Spicer told Mr. Trump that he believed the appointment was a major mistake.”

Spicer came from the Republican National Committee to the White House after developing a relationship with former chairman and now White House Chief of Staff Reince Priebus.

The resignation brings Spicer’s sometimes-tumultuous tenure as the press secretary to a close. He had become known for his antics at the daily press briefings, where he would call out media members for their coverage and sometimes get into arguments with them on camera.

Spicer’s press briefings had become quite the spectacle at times, and NBC’s Saturday Night Live! took advantage of the entertainment value in them. The show tasked Melissa McCarthy to do a hilarious rendition of Spicer at the press briefings, and it was an immediate hit.

There was no shortage of entertaining moments whenever Spicer took the podium at the press briefings. After the news of his resignation surfaced, Mother Jones Senior Digital Editor James West compiled an “in memoriam” video for him featuring some of his top sound bytes. Watch that video below.

SPICEY IS OUT.
IN MEMORIAM.
HOW WE'LL REMEMBER HIM. pic.twitter.com/foLhncQOPX

One of the most infamous interactions in the briefing room was on the day the Super Bowl champion New England Patriots were visiting the White House. As Spicer was on the stand, tight end Rob Gronkowski stops by and asks Spicer, who’s a Patriots fan, if he needed any help. Watch that video below:

That was just the beginning of the best and worst moments of Spicer’s career as press secretary. Watch some of his top moments in the videos below:

WH Press Secretary Sean Spicer speaks to reporters about the firing of FBI Director Comey as he walks into the West Wing. #FBIDirector pic.twitter.com/c2SNG63lIr

One day after Trump fired FBI Director James Comey, Spicer had an interesting interaction with reporters. He was left to explain the reasoning for Comey’s unexpected firing, and he seemed to have trouble doing so.

After an interview with Fox News where he appeared to stumble over his words, Spicer appeared in front of media members, but not before spending “several minutes hidden in the bushes,” The Post reported.

While he was doing so, his assistants were negotiating with reporters on the terms of the briefing, which lasted about 10 minutes, had the lights off, and was requested not to be recorded.

Spicer reportedly stood between a “clump of bushes” near the White House and then moved next to a tall hedge while conversing with his staff before emerging and answering a few questions from the press.

Spicer and reporter April D. Ryan got into it a few times during press briefings, but this one takes the cake.

The interaction happened March 28, and started after Spicer didn’t agree with Ryan’s body language after she asked a question. He requested that she refrain from shaking her head.

Spicer Brings up Hitler When Talking About Syria

There was the other time where, after a chemical attack killed over 80 people in Syria in April, Spicer misspoke. He was questioned about Syria Presdent Bashar al-Asssad and Russia’s relationship, and his answer drew much criticism.

Spicer compared Assad to Adolph Hitler, saying that “someone as despicable as Hitler … didn’t even sink to using chemical weapons.”

Of course, Hitler and the Nazis used gas chambers to execute millions of Jews during the Holocaust.

Spicer Realizes His Flag Pin Is Upside Down

On March 10, Spicer went behind the podium with his American flag pin turned upside down. In flag protocol, that mean’s Spicer was sending a distress signal. He didn’t notice that it was facing the wrong way or fix it until a reporter at the briefing informed him of it.

Spicer Has Food in His Teeth

During one press briefing back in March, Spicer got behind the podium and delivered his press briefing with a piece of food lodged firmly in his teeth.

Back during George W. Bush’s presidency, Spicer served as an assistant U.S. trade representative for media and public affairs. Part of his role under Bush was dressing up as the Easter Bunny during the annual Easter Egg Roll on the White House front lawn.

But, in Trump’s presidency, he graduated from that role and was selected to read “How to Catch the Easter Bunny” by Adam Wallace to a group of children. 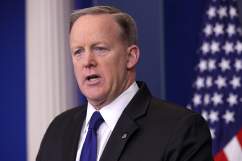 Loading more stories
wpDiscuz
0
0
Would love your thoughts, please comment.x
()
x
| Reply
White House Press Secretary Sean Spicer has resigned from his role. Watch videos of some of Spicer's best and worst moments in the job.