Footage filmed by five Florida teenagers shows them harassing and laughing at Jamel Dunn, 32, after the disabled man entered and drowned in a retention pond in the city of Cocoa. Police say that the teenagers, age 14 to 16, watched as the man drowned at Bracco Pond Park.

According to CBS, the teens were smoking marijuana in the park when they warned Dunn, who walked with a cane, to not enter the murky water. Dunn did so anyways, and soon after encountered problems with staying afloat. Police add that they aren’t sure if Dunn was trying to commit suicide or not, as he had just had an argument with his fiancee.

Dunn’s last minutes of his life were filmed by the teens.

“F**king junkie, get out the water, you gonna die,” said the teens to Dunn. After Dunn started to show signs of distress, another teen adds, “Ain’t nobody’s going to help you, you dumb b**ch. You should’ve never got in there.”

The teens made no move to call the police throughout the video and continue to laugh at Dunn.

Dunn’s demise was only realized after the video was released by the teens on social media. Florida Today reports that the teens showed little remorse once they were found by police. They cannot face charges because they were not directly involved with Dunn’s death. 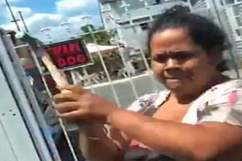 Read More
Youtube
wpDiscuz
45
0
Would love your thoughts, please comment.x
()
x
| Reply
Footage filmed by 5 Florida teenagers shows them harassing and laughing at Jamel Dunn, 32, after the disabled man entered and drowned in a retention pond in the city of Cocoa.