Today at 9 p.m. Pacific (11 p.m. Eastern), Elon Musk showcased the final reveal of the Tesla Model 3. The first 30 cars were delivered in a special handoff event, live. But when exactly can you expect to receive your Tesla 3? And what if you ordered a car today?

UPDATE: It appears that Tesla’s FAQ page has been updated to show that you can click here to find your estimated Model 3 delivery date. This directs you to your MyTesla page, which apparently will be showing estimated delivery dates soon.

The very first configurations available are a long range battery with rear-wheel drive and premium upgrades for $49,000. You’ll get to choose wheel size, exterior color, and autopilot features. These should begin to ship in late October.

Beginning most likely by November 2017, a $35,000 Model 3 with standard equipment will be an available option, according to Tesla’s FAQ page.

After that, you’ll see international Model 3 deliveries beginning in late 2018, followed by right-handcars in 2019.

It’s not too late to order a new Tesla Model 3. In fact, you can order one here. However, you’ll have to wait a while to get your new car. And because the reservation numbers are randomized, you can’t use your number to figure out when your car will be delivered or where you are in line.

Here’s what we learned about the release and delivery dates during the July 28 event.

Production of the Model 3 is expected to ramp up significantly over time. Elon Musk shared this chart:

“We’re producing as fast as we can,” he told the crowd, explaining that 10,000 unique parts in a Model 3 come from all across the world. This means that if anything goes wrong with even one part, production can be slowed down.

“The production rate will move as fast as the slowest … component in the mix,” he explained.

He didn’t offer an exact date for when you can expect to receive your car. But he did say that if someone were to order a Model 3 today, that person could expect to get it toward the end of next year.

“Those who have lined up to buy a model 3, that really matters to us and we really care,” he told the crowd. “We’re going to do everything we can to get you a car as soon as possible.”

As far as anything more specific, we can guess based on previous information that Tesla has shared.

On July 3, Elon Musk tweeted about expected production for the Model 3. He said the car had passed all regulatory requirements and 100 cars should be built in August, increasing to 1,500 in September. By December, he estimated that Tesla should be producing 20,000 Model 3 cars every month.

We know that Tesla is expected to deliver Model 3 cars to its own employees first, according to a call that Musk had in February with analysts. This is in line with how the launch of other Tesla models were handled previously, and allows Tesla to get quick feedback on its cars. Next, the cars will be delivered first to Tesla owners, especially those living closer to the Fremont plant. About 7 percent of reservation owners are current Tesla owners.

After previous owners receive their cars, production will then move on to everyone else, likely starting in the western part of the U.S. first and then moving on region by region. The simpler Model 3s will be produced first, with AWD Model 3s starting in early 2018.

Early next year. To start with, we're making the simplest Model 3 first, like we did with S. Didn't do it with X, because I was an idiot.

For drivers outside of the U.S. who need right hand driver cars, those are going to take longer. They won’t be on the road until sometime next summer in 2018.

Should be summer next year. Sorry, really wish we could get RHD done sooner. We truly are working as fast as we can.

If you’re wondering why Tesla staff get the Model 3 first, it’s because this is the easiest way to test any issues that come up with the first batch and fix them quickly.

Of course, before you receive your car, you’ll get a chance to make some minor configurations to it online. A discussion that one Redditor had earlier today with Tesla customer service also sheds light on possibly delivery dates.

On a Reddit thread here, Redditor _some_guy had ordered a Tesla on March 31st. He noted that his online order changed to say April 1. He called customer service, who said the order still showed as 3/31 on their end. However, Tesla customer service informed him that employees on the west and east coast will get their cars first, then California, and then Oregon. Since he ordered from Oregon, he may not receive an invitation to configure his Model 3 until early 2018, and he would receive his car sometime after that.

Since we don’t have an official estimate yet on car delivery dates from Tesla, you can look at an online Model 3 estimator in the meantime to get the best unofficial “guesstimate.” One of the best Model 3 estimators online is Troy’s Model 3 Estimator, created by Redditor Teslike (TeslaMotorsClub member Troy.) You can access the estimator, which is a Google Doc, here.

To use the estimator, just enter your delivery location, reservation date, reservation hour and time, ownership status (whether or not you are already a Tesla owner), and the Model 3 trim that you ordered. From this information, the doc estimates your global reservation number, your place on the list as of September 2017, and then uses the information to estimate your production start date, end date, and delivery date. This estimator may not be completely accurate, but it’s the best we can get so far.

This is a developing story. We’ll add more information as it’s available. 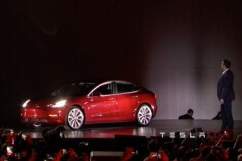 Read More
Tesla Motors
Follow Heavy ↓
wpDiscuz
0
0
Would love your thoughts, please comment.x
()
x
| Reply
When can you expect your Tesla to be delivered? Here's what we know so far.