President Donald Trump focused on foreign policy for a few minutes while the Senate debates on health care today. Trump met with Lebanese Prime Minister Saad Hariri, who is hoping to shore up support for Lebanon’s fight against the Islamic State. The joint press conference began a little after 3:00 p.m. ET at the Rose Garden. You can watch the event below.

The meeting came at an important time for Hariri, whose government is supporting the fight against ISIS and does not support Syrian President Bashar al-Assad. But the trouble for Hariri is that Hezbollah, a militant Lebanese group that has seats in both the Lebanese parliament and cabinet, has fought alongside Assad’s military. Hezbollah is also supported by Iran. Hariri’s goal in the talks with Trump will be to make sure the U.S. State Department doesn’t drop its aid to the Lebanese army.

As the Al-Monitor notes, the State Department’s 2018 budget plan cuts military assistant to Lebanon and other vulnerable Middle East countries by 80 percent compared to the 2016 fiscal year. The proposed cuts would mean eliminating the Foreign Military Financing (FMF) program, which made up about $86 million of the budget in 2016. The budget estimates Lebanon will receive $85 million in economic assistance, down from $110 million in 2016.

While these are Hariri’s concerns, Trump will likely face questions from American reporters about the Senate’s health care vote. In a statement on July 24, Trump pressured Republicans to repeal the Affordable Care Act, also known as Obamacare. There will be a vote in the Senate today, as Senator John McCain flew to Washington from Arizona, where he was recovering after being diagnosed with a brain tumor. 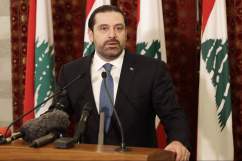