Valentin Duthion, a French citizen, arrived in the United States for a vacation only to discover that his $40,000 wheelchair for his spinal muscular atrophy had been destroyed. The video of the wrecked wheelchair was shared on Twitter by Duthion’s sister on July 4 and quickly went viral.

According to Travel Pulse, Duthion had been planning his nearly month-long vacation to the U.S. with eight friends and it took loads of extra planning due to his condition. The 550-pound chair is his only way to get around.

The group set up a travel blog to document Duthion’s adventure.

However, after arriving in Newark and receiving the checked wheelchair, Duthion’s dream seemed dashed. Both wheels of his chair were destroyed with one taken completely off its axis. The steering handle had also been destroyed beyond use and the interface box had been ripped off.

According to Australia’s 9News, “The airline has since offered Mr Duthion… access to a mechanic and another chair. However, [his sister] said the replacement chair was ‘not at all adapted to Mr Duthion’s requirements.'”

It was later reported that the replacement chair broke down on Duthion while the group was touring New York City.

United Airlines made international news in April when a disturbing video emerged showing airport workers forcibly removing a doctor named David Dao from a plane from Chicago to Louisville before takeoff at O’Hare International Airport.

United had oversold the flight and said that they needed his seat for United employees.

Dao has since settled out-of-court with United. 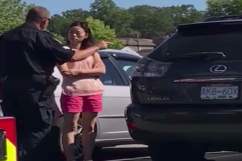 Loading more stories
wpDiscuz
0
0
Would love your thoughts, please comment.x
()
x
| Reply
Valentin Duthion, a French citizen, arrived in the United States for a vacation only to discover that his $40,000 wheelchair for his spinal muscular atrophy had been destroyed.