A video shows a woman, named Amber Elizabeth Hensley, going on a racist rant and threatening a group of Somalian women in a Walmart parking lot.

A video has emerged showing the moments a white woman threatened a group of Muslim women in a Walmart parking lot.

The woman, identified as Amber Elizabeth Hensley of Mapleton, North Dakota, berates the three women for parking “way too close” to her car in the parking lot of the store in Fargo.

Watch the video of the incident below:

The woman recording the video, 21-year-old Sarah Hassan, told the Grand Forks Herald she posted the video to social media to show people “what happens to us every day,” adding that she was “scared” when Hensley screamed the threats at them.

Hassan was in the car with her 20-year-old sister Leyla, who was driving, and their 23-year-old friend Rowda Soyan. They told the newspaper that they live in Fargo but are all originally from Somalia.

The group of women told the Twin Cities Pioneer Press that Leyla apologized for parking the vehicle too close and “tried to pull out to avoid confrontation.” They said Leyla was unable to exit the parking lot because Hensley was so close to the car that they were worried she’d accidentally run over her toes. That’s when the confrontation started.

Once the video was published to Facebook by Hassan and started going viral, Amber Hensley chimed in with a comment explaining her actions. She apologized and said she wished she could take it all back, adding the full incident leading up to the altercation wasn’t shown in the video.

It was not a Christian like thing to do AT ALL and wish I could take it back, but I lost my cool and I can’t. I am terribly sorry. I just wish that the whole video could be shown. And the things that were stated before she starts taping. She had parked way too close to my car and I couldn’t get in, when I asked her to move she refused, I asked her again and she swore at me calling me a fat b-tch.

But there are absolutely no excuses. I am in tears with regret and will take any form of punishment deemed fit.

Hassan told The Herald that the group called police after the incident and filed a police report. They showed officers the video, which contained Hensley’s license plate.

The Herald spoke with a man who identified himself as a partner at Hensley’s workplace, accounting firm Horab and Wentz. He said that Hensley would “be let go” from her job when she arrived.

“Her views are not ours,” the man said to the newspaper. “We’re the ones getting the brunt of this, no one else is.”

The incident in the parking lot comes just weeks after a discrimination case in nearby Moorhead, Minnesota. A Somalian-American male was assaulted by two white men while moving into his new apartment in Moorhead, police said.

“What are these n*****s doing here?” witnesses heard the men said before they assaulted him. 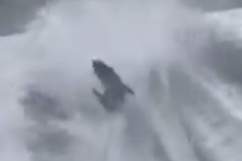