A woman standing behind President Donald Trump during his press conference on health care is getting a lot of attention on the internet today. However, the woman isn’t getting attention for something she said or something she did. Instead, social media has been busy talking about this woman’s eyebrows.

The press conference took place just after 3:00 p.m. Eastern from the Blue Room at the White House. However, not long after President trump started speaking, people noticed the woman standing behind him. Her eyebrows, which appear to be drawn on, sparked a Twitter frenzy and started trending. Within minutes, she became an internet meme.

According to The Mirror, the families standing behind President Trump were introduced to the public as people who have been “‘hurt’ by President Barack Obama’s signature domestic achievement.”

Take a look at some of the Twitter reactions below.

Why this lady behind trump bout to do long division with her eyebrows?!? Lmaooooo ???? pic.twitter.com/UdpyPB4jQD

Tell me you see the woman's eyebrows just behind Trump…. ??

Even her eyebrows can't believe they're there. #CNN #Trump pic.twitter.com/WO2sfBXshB

Unsurprisingly, social media users started to poke fun at the woman, suggesting that she lost her eyebrows due to Obamacare. Others even questioned if the woman’s eyebrows would be considered “pre-existing.” Given the fact that Trump’s speech was about health care,

Take a look at some of those tweets below.

"This woman is here to testify how #Obamacare ruined her eyebrows." pic.twitter.com/qX8REhjQPu

Yo can we talk about this woman's eyebrows? Is that a pre-existing condition? #Healthcare #trump pic.twitter.com/oV0EgAQTyi

"For the past 17 years Obamacare has wreaked havoc upon my ability to recreate eyebrows." pic.twitter.com/5I3xiFmltL

What the hell!? Lady needs health care for her eyebrows! pic.twitter.com/PlNQvMgtIr

Is it possible to repeal and replace eyebrows?

Someone even took it upon themselves to edit a photo of the woman, fixing her eyebrows.

I fixed the Trump health care eyebrow lady.
Can we move on now?#eyebrows pic.twitter.com/PiGzWir4uJ

The woman, who has not yet been identified by the media, isn’t the only one getting the Twitter treatment. The man standing next to her, believed to be her husband, has also caused a social media stir; many Twitter users think that he looks like Paul Ryan. Several have been saying that he looks like a younger version of the Speaker of the House. Others say that the doppelgänger looks like a version of Ryan from the 90s.

Twitter just couldn’t get over the combination of the woman (whom many are now referring to as simply “eyebrows”) and the guy who looks like Ryan.

You can see some of those posts below.

"You might be wondering how I got trapped between 2017 Donald Trump and 1990 Paul Ryan. First, let me tell you what happened to my eyebrows" pic.twitter.com/773kaDBqVl

Side-note: stoned Paul Ryan doppelgänger, and WTF is going on with that woman's eyebrows?? pic.twitter.com/zIDwYpYt9C 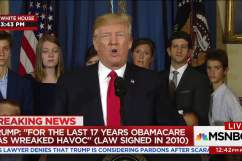