The total solar eclipse is on the horizon– well, just about.

Being dubbed the Great American Eclipse, a total solar eclipse hasn’t appeared in the US since 1918. Though it won’t be visible in India, it’s expected to last between 9:15pm and 2:34am.

The next total solar eclipse in India won’t happen for some time — 17 years, to be exact.

In India, a solar eclipse brings with it certain superstitions. It’s believed that the eclipse is an omen– particularly for pregnant women and their families. Hindu mythology sees eclipses as “engulfing of life-giving, energy providing Sun by an evil force,” in the words of NDTV.

Dinesh Kashikar, Trustee, Vaidic Dharma Samsthan, The Art of Living, tells NDTV that an eclipse is one of the best times to meditate. “… an eclipse is a great time to meditate and meditation is best done on an empty stomach, one should refrain from eating anything during the period of an eclipse… An eclipse affects the human body as the Sun, the Moon and the Earth come in a straight line. It is like the ebb and fall of tides, it affects our bodies in a similar fashion.”

The total solar eclipse will occur when the moon passes in front of the sun and casts a large shadow across what’s referred to as the “path of totality” (the area where it hits the Earth). The sun is 400 times larger than the moon, but an eclipse is possible because the moon is 400 times closer to earth.

Some residents along Interstate 24 have already began congregating to catch the sight, and many have come prepped with special solar glasses. Companies and local businesses are doing what they can to capitalize on the solar frenzy. Warby Park is handing out branded solar glasses and Harrah’s Casino in Metropolis is even promising a $100,000 eclipse giveaway, according to the Washington Post.

The path of totality spans approximately 70 miles and passes through about 14 states. The US Space Agency tells The India Times, “Its longest duration will be near Carbondale, Illinois, where the Sun will be completely covered for two minutes and 40 seconds.” 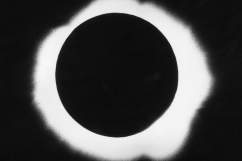 Read More
Eclipse, India
The total solar eclipse won't be visible in India but certain traditions related to the eclipse will still be observed.