Police have surrounded Buckingham Palace, blocking off the streets around Queen Elizabeth II’s home. Photos and videos on Twitter have surfaced showing a heavy police presence in the area. There have been several reports on social media of a gunman, a man with a sword, a man with a machete, and a suspicious package.

According to the Daily Mail, a man with a sword attacked police officers in front of a group of tourists. He was detained by police. Further details about what the man was doing, who he was, or his current condition are unclear.

The Metropolitan Police posted a link to their official release. It reads as follows:

“The man [no further details] was stopped this evening, Friday 25 August at approximately 20:35 hours by officers at the Mall outside Buckingham Palace in possession of knife. During the course of detaining him, two male police officers suffered minor injuries to their arm. The London Ambulance Service were called and they were treated at the scene. They have not been taken to hospital.”

They added that no one else was injured in the attack. Police are still in the area, making sure that everything is secure and conducting an investigation.

The Metropolitan Police have asked people to avoid the area. They sent out the following tweets just moments ago, confirming that there was an “assault on police.”

Officers are on scene at the Mall o/s Buckingham Palace. A man has been arrested on suspicion of GBH and assault on police

No other persons have been reported injured. Officers remain on scene and enquiries are ongoing.

Below are some photos and videos from the scene.

Buckingham Palace has been placed on lockdown.Police tape surrounds the palace. The scene of the attack is 300 yards away outside the palace pic.twitter.com/kNGl2vpftp

Buckingham Palace on lockdown after guard reportedly attacked with a sword pic.twitter.com/tYNMETmiE7

Being directed away from Buckingham Palace now as Police corden it off. No entry allowed in towards palace #buckinghampalace pic.twitter.com/dwlpRT3VJQ

Word of this attack broke about one hour after a similar attack was reported in Brussels, Belgium. According to The Sun, a man with a machete went after two soldiers and was shot dead. He was described as a “30-year-old man who is not known for terrorist activities,” by a spokeswoman for the prosecution service. The two soldiers suffered injuries on their faces and hands. It’s unclear how severe those injuries are. 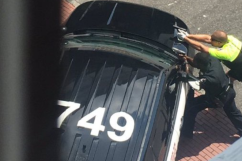