Getty Police investigate near the scene of a terrorist attack in the Las Ramblas area on August 17, 2017 in Barcelona, Spain.

More disturbing and graphic video has emerged as Spain was rocked with a second possible terrorist attack in the resort town of Cambrils following the Barcelona attack (pictured above). You can watch the video from Cambrils below, but be aware that it’s graphic and shows what are purported to be bodies of the suspected terrorists on the ground.

The attack in Cambrils came just hours after a van rammed into the busy promenade in Barcelona, killing 13 people and wounding up to 100.

Several hours later, five terrorists were killed in Cambrils, Spain in what authorities are calling a possible second terrorist attack. Video has emerged on social media that purports to show bodies of the suspected terrorists lying on the ground.

Here’s another view of the video, which originated on the Twitter page of a person named Jordi Archilla, a football coach:

Some news reports said the second attack was thwarted, but others said as many as six bystanders were injured, including one critically, in a possible new but unconfirmed car ramming incident.

Video also emerged from Cambrils with the sound of gunshots.

The man who posted the gunshot video, Eric Murillo, wrote in Spanish, “Right now at #Cambrils(they are not strong images, only heard shots). First in front of my house and now from my parents… ”

That wasn’t the end of it, though, as Spanish police tried to piece it all together and prevent further tragedy.

There was also an explosion in Alcanar, and reports ABC News, Spanish police say all three may be linked in a chaotic series of incidents that left a trail of dead and wounded. Photos of the house that was leveled in that blast demonstrated the power of that explosion.

The dramatic sequence of events in Cambrils, Spain, unfolded just hours after the first terrorist attack, which ISIS claimed via its Amaq news agency. Spanish police said there were at least three terrorists involved in the first attack.

Cambrils is a seaside resort not far from Barcelona. Police believe a carload of terrorists, possibly wearing explosive belts and packed into an Audi, tried to stage another terrorist attack along the lines of what happened in Barcelona earlier in the day on August 17.

“In Cambrils seven people including a police officer were wounded when a car was driven into a group early on Friday, Catalan emergency services said,” according to BBC.

The car flipped over and the men alighted from it, reported BBC.

The situation was very chaotic, and it was not yet clear how coordinated the attacks were and how many terrorists were involved in all.

El Pais, a Spanish language news site, reported that the terrorists in Cambrils were slain by police.

Alex Folch, 28, told CNN that he witnessed the aftermath and saw one of the terrorists lying on the ground with a belt around his waist; according to CNN, authorities are trying to determine whether the men were wearing explosive belts.

El Pais reported that the fifth terrorist in Cabrils took off on foot.

The terrorist was “shot when he tried to stab the passers-by” and may have been wearing an explosives belt, El Pais reported. According to El Pais, the Spanish government was warned by the CIA two months ago “of the risk of attack in the Catalan capital. US intelligence went a step further: it pointed to Las Ramblas (where the first attack took place this afternoon) as a possible target of terrorists.”

“We work on the hypothesis that the terrorists killed in Cambrils would be related to the events in Barcelona and Alcanar,” police said to ABC News.

Two people – whose names are not clear – were arrested in the Barcelona attack, but the driver remains at large, reports NBC.

Graphic video also emerged out of the Barcelona attack: 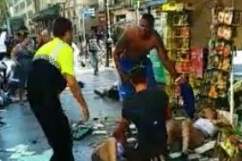