Getty The scene in Charlottesville, Virginia.

A 32-year-old woman crossing the street was dead, almost three dozen injured, and a state of emergency declared in Charlottesville, Virginia as white nationalists clashed with counter-protesters and a car allegedly driven by an Ohio man with a history of admiring Nazis rammed into a crowd. (Warning: Some of the videos and photos are very disturbing).

Authorities accuse James Alex Fields Jr. of driving the car that rammed into the crowd and killed Heather Heyer, injuring many others. He registered to vote as a Republican in 2016 and is a 20-year-old from Ohio who briefly served in the military. According to The Washington Post, he was booked on suspicion of second-degree murder, malicious wounding, failure to stop for an accident involving a death, and hit-and-run.

President Donald Trump interrupted a press conference on veterans issues to say: “We’re closely following the terrible events.. we condemn in the strongest possible terms this egregious display of hatred, bigotry and violence on many sides. On many sides. It’s been going on for a long time in our country.” Strong criticism erupted, including from some on the right, over the fact the president’s statement did not mention or call out white nationalists and because Trump did not call the attack domestic terrorism.

This photo captured by @RyanMKellyPhoto of @DailyProgress in #Charlottesville is so terrifying and insane but so important to capture pic.twitter.com/r2vPAV2rZw

Brennan Gilmore, a witness, told CNN that people were plowed down by a “terrorist.”

Later in the day, a state police helicopter crashed, killing two, as it assisted in the response to the the Charlottesville violence. Trump tweeted of the dead officers, “Deepest condolences to the families & fellow officers of the VA State Police who died today. You’re all among the best this nation produces.” He also tweeted, “Condolences to the family of the young woman killed today, and best regards to all of those injured, in Charlottesville, Virginia. So sad!”

The FBI has opened a civil rights investigation into the car ramming after calls to prosecute it as domestic terrorism. Buzzfeed and The New York Daily News accuse Fields of having a Facebook page with overt posts about Nazis, including a photo of Hitler as a baby. You can learn more about that here. Fields had registered as a Republican in 2016 and, according to The Toledo Blade, told his mother he was going to an alt-right rally.

1. The State of Emergency Was Declared After Clashes Broke Out Before a Major White Nationalist Rally

GettyRescue workers and medics tend to many people who were injured when a car plowed through a crowd of anti-facist counter-demonstrators marching through the downtown shopping district August 12, 2017 in Charlottesville, Virginia.

As the scene in Charlottesville grew ugly even before the Saturday rally’s start time on August 12, the governor of Virginia declared a statement of emergency for the city. The rally was then shelved, at least temporarily.

The “Unite the Right” rally was scheduled to start at noon as white nationalists and right-wing activists descended on Charlottesville because they are upset that the city is removing Confederate symbols.

According to The New York Times, hundreds of white nationalists showed up in the city to wave “Confederate flags” and chant “Nazi-era slogans, wearing helmets and carrying shields.”

The focal point of their rally was a statue of the confederate general Robert E. Lee in a park in the city. The Times reported that the white nationalists chanted things like “You will not replace us” and “Jew will not replace us.”

The newspaper reported that hundreds of counterprotesters “quickly surrounded the crowd, chanting and carrying their own signs.”

According to The New York Times, people “were seen clubbing one another in the streets” and engaged in “outright brawling.” White nationalists gave Nazi salutes and carried torches.

Virginia Gov. Terry McAuliffe had a message for the white nationalists.

“Our message is plain and simple: Go home,” McAuliffe said. “You are not wanted in this great commonwealth. Shame on you. You pretend that you’re patriots, but you are anything but a patriot. You want to talk about patriots? Talk about Thomas Jefferson and George Washington, who brought our country together.” 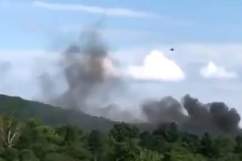 2. A Car Rammed Into a Crowd & Multiple People Were Injured During the Protests

In the most disturbing incident, a car sped into a crowd of counter protesters, sending multiple people to the hospital. According to Fox News, Virginia Secretary of Public Safety Brian Moran told the Associated Press that the male driver of the car was in custody.

The death of the woman is being pursued as a “criminal homicide.”

Heyer was identified as the lone fatality in the car ramming attack on the crowd of counter protesters, who were trying to combat the hateful message disseminated by white nationalists in Charlottesville.

Video of car hitting anti-racist protestors. Let there be no confusion: this was deliberate terrorism. My prayers with victims. Stay home. pic.twitter.com/MUOZs71Pf4

Heyer was a native of Greene County and graduated from William Monroe High School. She worked for Miller Law Group PC in Virginia as a legal assistant, according to her profile on LinkedIn. She was a Bernie Sanders supporter in 2016 and was open about those political views on her Facebook wall.

A GoFundMe site was established in her name.

“At least seven people were hurt when a speeding car slammed into another car that was navigating through a throng of counterprotesters in Charlottesville,” CNN reported at first. The injury count then grew. It was not yet clear whether the person who died was injured in the car attack.

GettyThe car that allegedly plowed through a crowd of protestors marching through a downtown shopping district is seen after the vehicle was stopped by police several blocks away August 12, 2017 in Charlottesville, Virginia.

CNN described how multiple vehicles were also struck in the car ramming. “Video of the incident shows a gray Dodge Challenger driving quickly down a narrow side street lined with walking protesters. The sports car rams into the back of a silver convertible, which hits the van in front of it,” CNN reported.

A witness told WTVR that “the car plowed into the crowd before it was stopped by two other vehicles. She said the suspect’s car then backed over people.”

According to AP, “Michael Nigro, a photojournalist from Brooklyn, told reporters shortly after the incident he heard the screech of tires and saw a gray Charger accelerate toward the group. Several hundred people were peacefully marching through downtown.”

Charlottesville Mayor Mike Signer wrote on Twitter: “I am heartbroken that a life has been lost here. I urge all people of good will — go home,” but he didn’t explain how that person died or whether it was in the car ramming attack.

One man who was falsely identified on Twitter as the suspect wrote on Facebook that he lived in Michigan and didn’t even have the same type of car.

Derek Weimer, Fields’ former history teacher, said that Fields was interested in Hitler and the Nazis for years.

“A lot of boys get interested in the Germans and Nazis because they’re interested in World War II,” the Kentucky teacher said. “But James took it to another level.” He wrote a report on Hitler as a high school student that was “beyond the pale,” the teacher added.

Buzzfeed and New York Daily News reported that a now deleted Facebook page appeared to belong to Fields in the name of Conscious Ovis Aries, and had overt Nazi and white supremacy references, including a photo of baby Hitler and travel photos of the Reichstag. You can read more about that here and see screenshots:

3. President Donald Trump Condemned the Violence on ‘Many Sides’ & Has Drawn Criticism

Trump condemned the violence, but he didn’t refer to it as domestic terrorism and didn’t mention white nationalism. That’s upset many, including some in his own party.

We should call evil by its name. My brother didn't give his life fighting Hitler for Nazi ideas to go unchallenged here at home. -OGH

Very important for the nation to hear @potus describe events in #Charlottesville for what they are, a terror attack by #whitesupremacists

I urge the Department of Justice to immediately investigate and prosecute this grotesque act of domestic terrorism. pic.twitter.com/AwJLsfUEHl

You can watch the video of Trump’s statement above. Trump starts speaking at about 35 minutes in.

Cornell Brooks, former president of the NAACP, told CNN he was disappointed in Trump’s statement because it evoked a moral equivalency between white nationalists and other protesters at the scene, and Trump did not use the terms KKK or white nationalist in his statement. Another CNN commentator critical of the speech said it will likely be known as the “many sides” speech.

Pres. Trump ignores shouted question after remarks on Charlottesville: "Do you want the support of these white nationalist groups?" pic.twitter.com/qogS0RCM05

The president did bring up Barack Obama, unemployment and trade in addressing the issue.

He talked about employment figures and trade deals and said “we have companies pouring into our country….we have so many incredible things happening in our country. So when I watch Charlottesville, to me it’s very very sad.” He credited law enforcement in Charlottesville and the National Guard.

“Our citizens must restore the bonds of trust and loyalty between one another,” the president added. “…We have to respect each other. Ideally we have to love each other.”

Now is the time for leaders to be strong in their words & deliberate in their actions.

Every minute we allow this to persist through tacit encouragement or inaction is a disgrace, & corrosive to our values.

House Speaker Paul Ryan wrote on Twitter, “The views fueling the spectacle in Charlottesville are repugnant. Let it only serve to unite Americans against this kind of vile bigotry.”

Horrific video showed the vehicle ramming into people, and people being treated at the scene. They also documented other clashes. Here are some of the Charlottesville videos and photos posted on social media:

#Charlottesville 11:36am ? BREAKING – Police declaring this an unlawful assembly, order to disperse or face arrest pic.twitter.com/rZctrDRd9I

5. In April, the City Voted to Remove a Robert E. Lee Sculpture

GettyVirginia state police in front of the Robert E. Lee statue in Charlottesville, where white nationalists organized a “Unite The Right” rally.

Charlottesville has been the subject of alt-right protests and KKK rallies ever since the Charlotte City Council voted in April 2017 to remove a bronze equestrian Robert E. Lee from the city’s downtown.

There is a pending court suit challenging statue relocation. In May, WDBJ reported that Judge Richard Moore ruled that the statue’s removal would be delayed by six months.

“Multiple plaintiffs, including the Sons of Confederate Veterans, argued the statues are covered under a Virginia monument law that protects them from being removed,” the television station reported.

You can learn more about the statue controversy here: