Chris Pratt and Anna Faris, one of Hollywood’s favorite couples, announced they are legally separating, via social media on Sunday night.

Both Pratt and Faris, posted the following message on their social media accounts Sunday night:

Anna and I are sad to announce we are legally separating. We tried hard for a long time, and we’re really disappointed. Our son has two parents who love him very much and for his sake we want to keep this situation as private as possible moving forward. We still have love for each other, will always cherish our time together and continue to have the deepest respect for one another.
Chris Pratt and Anna Faris

Anna and I are sad to announce we are legally separating. We tried hard for a long time, and we’re really… https://t.co/Zw5HcMQCZ3

Pratt and Faris met in 2007, when they co-starred in Take Me Home Tonight.

The two were married in Bali, Indonesia in 2009. They have a four-year-old son named Jack. Jack was born in August of 2012. He arrived nine weeks premature and spent a month in the NICU.

Faris was previously married to fellow actor Ben Indra from 2004-08. She is currently shooting a fifth season of her CBS show, Mom, and voices a role in The Emoji Movie, currently in theaters, according to Hollywood Reporter. Faris also hosts Unqualified, a weekly podcast which focuses on relationships.

Pratt recently appeared in Guardians of the Galaxy Vol. 2. He is shooting a Jurassic World sequel, due out in 2018. Pratt will also be in next year’s Avengers: Infinity War as Peter Quill/Star-Lord.

The news comes as a shock to many, as Pratt and Faris were one of Hollywood’s most beloved couples. A video highlighting their positive relationship circulated on social media just months ago. The video was titled “Top 10 Times Anna Faris And Chris Pratt Made Us Believe In Love”

Pratt recently had a guest-starring role on Mom with Faris earlier this year: 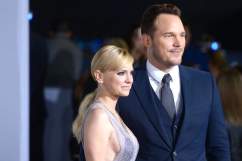