In June, Michelle Carter was convicted of involuntary manslaughter for persuading her boyfriend, Conrad Roy, to commit suicide through a series of text messages. On Thursday, Judge Lawrence Moniz sentenced Carter to 15 months in a county jail. She will remain free pending appeals.

Conrad was just 18 when he died. He is survived by his father, Captain Conrad H. Roy, Jr., and Carolyn P. McGonagle; his mother, Lynn R. (Bozzi) Roy and Brian Smith; his sisters, Camdyn and Morgan Roy; his grandparents, Janice and Conrad H. Roy, Sr., and Madeleine and David Bozzi; his great-grandmother, Constance Gaucher; aunts and uncles, Jonathan and Kristen Roy, Rebecca and Matthew Maki, Lisa and Tom O’Donnell, and Kim Bozzi.

Read on to learn more about Conrad Roy’s parents and family.

1. Roy’s Mother Is Seeking $4.2 Million in a Wrongful Death Suit Against Carter

The family is not trying to be vindictive. They are trying to find a way to memorialize Conrad so that he will be remembered for years to come/They want to set up a fund or scholarship in his name.

Roy’s sister, Camden, broke down while speaking in court, saying she’ll be “haunted” by the realization she’ll never see Conrad wed or be an aunt to his children.

Conrad Roy Jr., Conrad’s father, also took the stand to say that Carter “exploited my son’s weaknesses and used him as a pawn” for her own interests.

Along with Camden, Conrad is survived by his other sister, Morgan.

In an ABC News Exclusive, Conrad’s cousin, Makenna O’Donnell, was asked to describe her cousin. “He was so funny,” she said. “He was goofy. He had so much life. He was selfless. And he had strength. He was just a great person.”

For some time, Conrad worked with his father, grandfather, and uncle in his family’s marine salvage business, Tucker-Roy Marine Towing and Salvage, Inc.

He was born in 1995 in New Bedford, Massachusetts. According to his obituary in Sippican Week, Conrad graduated from Old Rochester High School with a 3.88 GPA. He’d been accepted to Fitchburg State University at the time of his death.

In an April 2016 interview with Boston.com, Lynn Roy admitted that her divorce from Conrad’s father was very hard for him.

The outlet goes on to report that on the last day of Conrad’s life, he walked the beach with his mom, laughing and smiling at her jokes. “You think your kids are doing better,” she tells the outlet.

Lynn says she believes Conrad’s state of mind left him vulnerable to Carter’s influences. “I believe he totally trusted her… For some reason, he loved her. … She’s not well and he’s not well and they were obviously not well together.”

Speaking to ABC News, Makenna O’Donnell, Conrad’s cousin, said that upon hearing Carter’s verdict she felt “sick to her stomach. The fact that she can just be free and my cousin– he’s not here– 2.5 years isn’t enough. It isn’t enough. She should be behind bars.”

Asked if there was any justice in the case, O’Donnell said, “Just a little bit. Not enough. It’s not enough. She should be in jail. It’s just– I don’t understand how someone could be free knowing she deliberately told him to get back in the car.”

5. Lynn Roy Works as a Nurse

Lynn works as a nurse.

Lynn admits to the outlet, however, that she now knows there were certain things Conrad kept from her. “I just wish I knew… I feel so horrible that I didn’t know.” 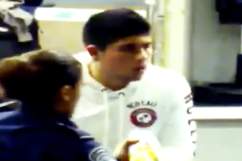