A woman who claims that her son is missing decided that the solution to her dilemma was to burn down an apartment building at 6 a.m. in the morning while families were sleeping inside. The video was posted on YouTube by eldermisanthropy22 with not much context. The poster wrote in the summary:

Woke up on my buddies couch to knocking and yelling. The saw this crazy lady trying to light this apartment on fire at 6am. its wayyyy too early for this s**t.

So for some insight. She was some random lady. The guy in the house finally came out when she left. I showed him the video. he had no idea who she was or that she was actually gonna set fire to the house. the police and fire showed up and are searching for her and want to press charges. General consenses is drugs and/or wrong house.

He titled the video “Crazy Lady Tries to Light Apartment on Fire!”

The video begins with the filmer walking up some concrete steps to the main path to a series of apartments. A woman, with her back to her camera, appears to be gathering up paper from a trash bag to use as kindling in front of an apartment door marked “4.”

“Excuse me, what are you going to do with that?” the filmer asks the woman.

“I’m gonna light the f**king house on fire,” the woman responds without turning around.

“Why don’t you use the cops?” the filmer asks the woman. “Why are you doing that?”

“Call the cops yourself!” the woman shouts, turning around to confront the cameraman.

“I will! Look what you’re doing. You know how many other families live here? You’re putting all at risk.”

They exchange a few more words and the video cuts out. 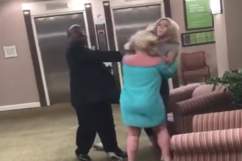 Read More
Youtube
Follow Heavy ↓
wpDiscuz
0
0
Would love your thoughts, please comment.x
()
x
| Reply
A woman who claims that her son is missing decided that the solution to her dilemma was to burn down an apartment building at 6 a.m. in the morning while families were sleeping inside.