Youtube David Berkowitz in a 1999 interview with Larry King.

Tonight, in honor of the 40th anniversary of his capture, Investigation Discovery will air a new documentary that centers on one of the largest police manhunt in New York City mystery.

David Berkowitz, also known as the “Son of Sam”, avoided police for over a year before he was arrested outside his apartment building. Son of Sam: The Hunt for a Killer will explore the lives of the Berkowitz’ victims and the detectives who ultimately found him.

Read on to learn more about David Berkowitz, the “Son of Sam.”

1. He Has Been Imprisoned and Is Serving Six Consecutive Life Sentences

40 Years After His Arrest, How 'Son of Sam' David Berkowitz … https://t.co/9gXfWZoMFB #Yonkers pic.twitter.com/J9fbYPdvLe

On August 10, 1977, Berkowitz was taken into custody by NYC police homicide detectives. He was indicted for eight shooting incidents and confessed to all of them. In an exclusive clip which you can watch here, NYC police detective William Gardella recounts what Berkowitz said upon being arrested: “You got me. What took you so long?”

While police were trying to find him, Berkowitz wrote letters to a number of news outlets, subsequently becoming a focal point in the media and causing a frenzy. He first referred to himself as the “Son of Sam” on April 17, 1977, in a letter to the police. One month later, he penned another letter to the New York Daily News.

Today, Berkowitz is 64, and is serving six consecutive terms of a 25 years to life prison sentence after he plead guilty to murder in 1978. In 2016, Berkowitz was denied parol for the 15th time. He’ll appear before the board again in May 2018.

2. He Was Adopted as a Child

David Berkowitz’ mother, Elizabeth “Betty” Broder, grew up in a lower class Jewish family, and married a man named Tony Falco. Within four years, he left her for another woman. In the 1950s, Betty met and married another man, Joseph Klineman, although some outlets say Klineman was an affair and the two never married. Not long after meeting Klineman, Betty gave birth to a child who she chose to give the surname Falco to. Within a few days of him being born, she gave the child away.

The boy– Richard David Falco– was adopted by Pearl and Nathan Berkowitz, who lived in the Bronx and worked retail in a hardware store. They changed their adopted son’s name to David Richard Berkowitz.

3. He Claims He Was Obeying Orders from a Demon

After his arrest, Berkowitz told authorities he had been obeying orders from a demon who appeared to him in the form of Harvey, a black Labrador retriever who belonged to his neighbor Sam.

According to the East Hampton Star, one of the orders Harvey gave Berkowitz was to “go the Hamptons in the first week of August” and “kill many people in Southampton.”

When he was captured in 1977, Berkowitz’s claim that he was killed by a demon through a dog led authorities to deem him mentally unfit. Eventually, however, that ruling was reversed and he pleaded guilty. In 2013, criminologist Scott Bonn, who interviewed the killer in prison, wrote, “He is very aware of the public’s fear and incredible fascination with him… He is a gnome-looking, bald, chubby guy with red cheeks, and he comes bouncing in to meet you,” Bonn tells PEOPLE. “He is quite different from the sullen ‘Son of Sam’ from the ’70s.”

4. He Killed Six People and Wounded Seven Others

5. He’s a Former Soldier and Worked for the US Postal Service

David Berkowitz is a former soldier and worked for the US Postal Service.

Those who have kept up to date with his life are aware he’s abandoned the title “Son of Sam”, and claims to be a born again Christian. He now calls himself the “Son of Hope”.

According to People, a New Jersey minister named Roxanne Tauriello visits Berkowitz regularly in prison, and says that Berkowitz seems like a changed man. “He is genuinely sorrowful and does not want to get out of prison… He knows he deserved to die and deserves to be exactly where he is.” He continues by sharing that Berkowitz hopes to “warn young people on the road to destruction. One of his ministries is to reach out to young people to show them the consequences of [their] actions.” 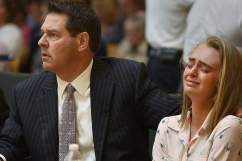 Loading more stories
wpDiscuz
2
0
Would love your thoughts, please comment.x
()
x
| Reply
Here's what you need to know about David Berkowitz, ahead of ID's new documentary, Son of Sam: The Hunt for a Killer.