An American private equity partner who was arrested for questioning in the case of a jogger shoving a woman into oncoming traffic in London is calling it a case of mistaken identity.

Eric Bellquist, a 41-year-old employee at Hutton Collins Partners LLP., says he’s been misidentified by authorities in relation to the case after he was questioned by police in the matter August 10.

Metropolitan Police had released shocking CCTV video from the May incident that showed a male jogger running toward a 33-year-old woman and shoving her to the ground near an oncoming bus. The woman narrowly avoided being struck by the bus and suffered only minor injuries from the fall.

On August 10, police announced they made an arrest in connection with the case at a residential address in Chelsea, adding they questioned Bellquist and ended up releasing him on bail.

“Police investigating an assault after a jogger appeared to push a woman into the path of an oncoming bus in Putney have made an arrest,” police said in a statement.

Bellquist, a San Diego native, has since denied any wrongdoing.

1. Bellquist & His Lawyers Claim He Was in the United States When the Incident Occurred

Bellquist and his lawyers have since denied he had anything to do in the incident, saying he’s been “wrongly implicated.” His lawyers took to Twitter to clear his name, saying he has “irrefutable proof” that he was in the United States when the incident took place.

1/3 Eric Bellquist, who was arrested yesterday in relation to an assault that took place on #PutneyBridge has been wrongly implicated

3/3 Consequently, we expect a swift resolution to this wholly untrue allegation.

Bellquist has not been charged with any crime in relation to the incident as police continue to investigate.

Police continue their search for the perpetrator and are asking anyone with information to call the Putney Safer Neighbourhoods Team at 020 8785 8874 or 101 or tweet @MetCC. Tipsters can remain anonymous.

2. Bellquist Graduated From the University of Colorado & Is an Investment Banker

According to his LinkedIn profile, Bellquist is an investment partner at London-based Hutton Collins Partners, a firm that owns Wagamama and Byron Hamburgers, two British restaurant chains. He’s been with the company since 2002 and also runs the firm’s investment in Caffè Nero, a European-style coffee house.

Bellquist sits on the boards of the two restaurant chains as a non-executive director. He’s also and advisor and shareholder for the alcohol manufacturer Elephant Gin.

Previously, Bellquist represented the company in the leisure, media/telecom and manufacturing sectors, his biography on the company website said.

Bellquist graduated from the University of Colorado-Boulder in 1999 with a degree in business administration after attending the Leeds School of Business. His first job out of school was as an analyst for failed U.S. investment bank, Lehman Brothers, which filed for Chapter 11 bankruptcy in 2008. It was the largest bankruptcy filing in American history with the company holding over $600 million in assets at the time of filing. 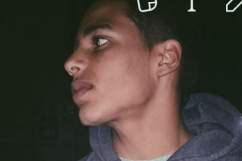 3. Police Have Been on the Hunt for the Suspect After Releasing the Stunning Video

After exhausting many leads, British police released the surveillance tape from the May 5 incident with the hope of locating the suspect. In the video, which was released in early August, the suspect is seen running down a street on the Putney Bridge as he approaches the woman from the other direction.

As the jogger and the woman come closer, the man nonchalantly reaches out and shoves her to the ground, toward the road and directly into the path of an oncoming bus. The jogger continues running down the road as if nothing happened.

The bus driver was able to swerve out of the way at the last second and narrowly avoided hitting her.

Police had initially described the man as being in his early-to-mid-30s with brown eyes and short brown hair, and encouraged those with any information to come forward.

After noticing the ordeal and narrowly missing her, the bus driver pulled over, and passengers on board exited to assist the woman. She received “minor” injuries from the fall and hasn’t yet been identified.

According to The Guardian, officers said that after pushing the woman, the jogger ran back the other way across the bridge “about 15 minutes later.” The woman was still on the bridge and reportedly tried to talk with the man, but “he did not acknowledge her.”

“By this time, the members of the public who had helped the woman were gone and she tried to talk to him as he ran past her but he just ignored her,” police said. 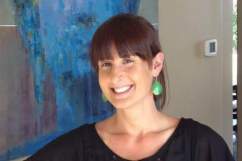 4. Police Praised the Quick Action of the Bus Driver for Avoiding Tragedy

Ever since the incident occurred, authorities and colleagues have applauded the quick reflexes of the bus driver, who was able to swerve out of the way and come to a halt safely.

The unidentified bus driver was traveling at about 12 miles per hour when he looked to the sidewalk and noticed the incident occurring. As the woman tumbled to the ground with her head in the path of the oncoming bus, the driver swerved to the middle of the road, narrowly avoiding her.

“The victim was put in extreme danger when she was knocked into the road,” Sergeant Mat Knowles, the investigating officer from Putney Saftey Safer Neighbourhood Team, said. “It was only due to the superb quick reactions of the bus driver that she was not hit by the vehicle.”

The bus driver’s colleagues referred to him as a “hero” for avoiding a potentially-tragic end to the incident.

“He’s a hero and deserves a medal for saving that poor woman’s life,” one colleague told The Evening Standard. “We’re used to having to dodge cyclists but to have to witness a woman being pushed in front of your bus is scary — he’s definitely a hero.”

According to bus records, the driver was on the Go-Ahead London 430 service from Roehampton to South Kensington as it crossed over the Putney Bridge at 7:40 a.m. local time.

The bus driver “immediately returned to work,” but was left stunned not just by the traumatic incident, but by the glowing praise he’s received.

“It’s horrific to think what could have happened if the driver wasn’t able to act as quick as he did, or if he’d been checking mirrors at that moment,” another colleague with 20 years experience told the Evening Standard. “To have the precision to also avoid all the other cars, people and other traffic should be commended.

“These situations are where our training and experience are put to the test, that’s why he managed to act so quickly.”

5. Police Had a ‘Huge’ Response After the Video Release, Which Led Them to Bellquist

The moment after the woman was shoved to the ground.

According to Evening Standard, detectives have tried using the website Strava, which records cyclists’ and runners’ routes and times, to try and trace the suspect and any other potential witnesses in the attack.

They noted August 9 that they were “closing in” on the man, The Daily Mirror reported.

“We can confirm that we have received a good response from the appeal and are following a number of lines of enquiry,” police said in a statement. “We are still keen to hear from anyone who has information who has not yet come forward.”

Read More
5 Fast Facts, Breaking News, Crime
Eric Bellquist, an American partner at an equity firm, has denied any wrongdoing in the case of a jogger shoving a woman in London.