Despite repeated warnings from scientists, many people throughout the U.S. decided to learn the hard way that scientists are often right when they tell you not to star directly at the sun. Scientists made it clear that you need to use solar eclipse glasses or pinhole projectors to see the moon block the sun, but that didn’t stop people from ignoring it.

After the eclipse was over in much of the country, searches for “eyes hurt” skyrocketed.

As we previously noted, it is possible to permanently damage your eyes if you look at a solar eclipse without wearing the special glasses. In the days leading up to the eclipse, there were horror stories in the press, including one from Lou Tomososki.

NASA: don't look at the eclipse without glasses, it will hurt your eyes

You were right @cal50 "my eyes hurt" is the search phrase of the day on here pic.twitter.com/AQW7SQw2GA

Why does this happen? “When you look directly at the sun, the intensity of the light and the focus of the light is so great on the retina that it can cook it,” Dr. Christopher Quinn, president of the American Optometric Association, told CNN. “If the exposure is great enough, that can and will lead to permanent reduction in vision and even blindness.”

“It’s really impossible for people, when they’re in the moment, to make a judgment over brief versus prolonged exposure,” Quinn continued. “It’s never a good idea to view the eclipse without the protection.”

admire my pictures i hurt my eyes for em pic.twitter.com/bXwKErKcyo

Wore these but my eyes kinda hurt ??? ??‍♀️ #SolarEclispe2017 pic.twitter.com/zqrhoU1IK4

Pro-tip: if you accidentally leave your contacts in the night before an eclipse, your eyes will hurt all day anyway. #inyourFACEsun

For more information on eye damage caused by looking at a solar eclipse without glasses, click below. If your eyes hurt, see an eye doctor immediately. 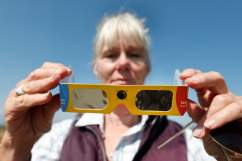 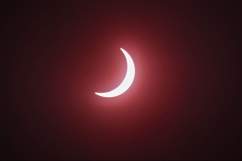 Can You Go Blind from the Solar Eclipse?