Following white supremacist riots in Charlottesville, Virginia, a recording of the interview of Fountain Hughes, a slave born there before the Civil War, has resurfaced. The audio is in an ABC News Nightline piece from the 90s titled “Found Voices,” hosted by Ted Koppel. The entire video features voices of many other slaves, too, but the recent events in Charlottesville have placed Hughes in its spotlight.

Hughes’ part begins, “My name is Fountain Hughes. I was born in Charlottesville, Virginia. My grandfather belonged to Thomas Jefferson. My grandfather was 115-years-old when he died. And now I am 101-year-old.”

One of Hughes’ bio states he was born on May 10, 1848, but this may not be exact. According to the audio, Hughes is 101 at the time of the interview, which would make it 1959. Hughes died in 1957. An inaccurate birth year would be common for slaves. According to My Slave Ancestors, “Not every birth that has taken place in the United States has been recorded; in fact, most slave states did not require births and deaths to be recorded until after 1910. Virginia’s birth and death records date from 1853.” Another bio of Hughes places his birthday in 1854.

The exact date of the interview is also unknown, but Koppel states that all the audio comes from the 1930s and 40s.

In the audio, Hughes details aspects of his life as a slave: sleeping on the floor and unable to learn how to read.

More interesting, Hughes was a descendant of Betty Brown, personal servant to Thomas Jefferson’s wife, Martha. Monticello.org writes that Fountain was the son of Wormley Hughes, a gardener and ox-team driver for Monticello.

…can't change history, but you can learn from it. Robert E Lee, Stonewall Jackson – who's next, Washington, Jefferson? So foolish! Also…

The name may bring up more ire from President Trump supporters, who was quick to point out again in a tweet this morning that America’s Founding Fathers owned slaves, not just Confederates.

“We were slaves,” Hughes continues. “We belonged to people. They’d sell us like they did with horses or cows or hogs.”

The audio then goes onto another slave, a female, detailing the abuse she endured at the hands of slave owners.

The above video resurfaced due to this past weekend’s showdown between white supremacists and counterprotesters in Charlottesville. White supremacists had planned a “Unite The Right” rally in the city, which drew white nationalists from all over the country to the city. The rally was in response to the Charlottesville City Council voting to remove a bronze equestrian Robert E. Lee statue.

Lee was a Confederate general during the Civil War.

The park that the statue was in, named after Lee, has also been renamed Emancipation Park.

During the aftermath of the canceled rally, counterprotester Heather Heyer was killed when rally attendee, James Alex Fields Jr., purposefully drove his car into a crowd. 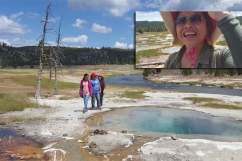 Loading more stories
wpDiscuz
0
0
Would love your thoughts, please comment.x
()
x
| Reply
Following white supremacist riots in Charlottesville, Virginia, a recording of the interview of Fountain Hughes, a slave born there before the Civil War, has resurfaced.