Getty Stranded vehicles sit where they got stuck in high water from Hurricane Harvey on Dairy Ashford Drive, August 28, 2017 in Houston, Texas.

Houston has already seen record-setting rainfall totals during the three days that Tropical Storm Harvey, which made landfall as a hurricane, has hammered the region. Some areas have seen two feet of rain, with more on the way, the National Weather Service says.

According to the weather service, 16.07 inches of rain fell on Sunday alone, breaking the record for the most rainfall in a day in Houston. “It is the single highest daily rainfall total in city history. In the last two days, 24.44 inches of rain has fallen. August 2017 is now the wettest August on record and also the wettest month all time beating June 2001 (Tropical Storm Allison),” the National Weather Service says. The previous daily record was about 8 inches of rain.

After checking the rain gauge, a new daily rainfall record was set at the NWS Office of 16.08" beating yesterday's record of 14.40" #houwx

“Since June 1st, Houston has received 46.16 inches of rain which is about 33 inches above normal. The annual average rainfall for Houston is 49.77 inches, so roughly a years worth of rain has fallen in the last three months,” the weather service says.

Nearly all major watersheds in Harris County were out of banks during the peak and aftermath of Saturday night’s deluge. Many of Harris County bayous remain high but some of the smaller basins have begun to recede. Larger streams and rivers continue to rise and many of these are projected to reach record high crests. Cypress Creek continues to rise and may breach a levee near Inverness Forest. The Addicks and Barker Reservoirs are forecast to reach new record high values and releases from the reservoirs have begun. This will add to the flow of Buffalo Bayou.

Here are the latest rainfall totals for the city from Friday to Sunday: 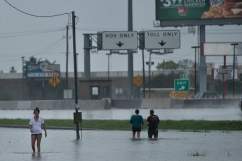 Loading more stories
wpDiscuz
6
0
Would love your thoughts, please comment.x
()
x
| Reply
Houston has seen record amounts of rain during the three days that Harvey has hit the region, and more is still to come.