An image showing a large shark swimming through a flooded area has circulated on social media.

As “catastrophic” flooding of historic proportions continues to ravage the Houston area following Hurricane Harvey, incredible images and videos have surfaced online showing the extent of the damage.

From photos of improbable rescues to others showing cars buried completely underwater, the city will be recovering from the results of the Category 4 storm for quite some time. Initial damage estimates say it will cost the city almost anywhere from $3-15 billion to clean up from the mess. Weather forecasts say there will be 50 inches of rain that will have fallen in the area since it made landfall Friday.

However, one photo in particular has caused a stir on Twitter. It appears to the naked eye to be an image taken by a photographer in the front seat of a truck showing what appears to be a shark swimming through a flooded street.

The photo was posted by Twitter user Jason Michael and had over 14,000 shares within just 10 hours, most of which were by people who are shocked to see such a thing occurring as a result of the torrential flooding.

“Believe it or not, this is a shark on the freeway in Houston, Texas. #HurricaneHarvey” Michael writes in his caption.

Believe it or not, this is a shark on the freeway in Houston, Texas. #HurricaneHarvy pic.twitter.com/ANkEiEQ3Y6

But the image is fake. It’s not real and it has nothing to do with the tragic flooding in Houston. The image circulates around social media after just about every single storm in the U.S. when extensive flooding occurs.

According to Snopes, the image shows what appears to be a Great White shark. It “was originally circulated as showing a street in Puerto Rico just after Hurricane Irene hit that island in August 2011.”

Snopes concluded that the image of the shark was lifted from a 2005 photo of a kayaker being followed by a Great White in Africa Geographic. It was taken and then photoshopped onto a photo showing flooding in the city.

It made waves on social media after Hurricane Sandy in 2012, flash floods in Texas in 2015 and Hurricane Matthew in 2016.

So while the flooding has led to shocking imagery, including a man catching a fish in his living room, there are no sharks on the loose on the streets of Houston. But fire ants are a different story.

Fire ants form a protective island as they float out the #Houston flood pic.twitter.com/UBORwAzA4R

In case you're wondering what fire ants are doing during Houston flood. They're creating rafts out of dead bodies. The white specks are eggs pic.twitter.com/GXS4ei4FtM

There are floating piles of fire ants in the flood waters in Houston ☹️ #Harvey2017 pic.twitter.com/vdiUPUiylY 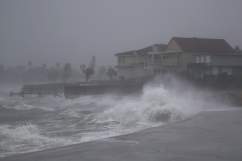 Loading more stories
wpDiscuz
0
0
Would love your thoughts, please comment.x
()
x
| Reply
A photo showing a shark swimming on a freeway in Houston after Hurricane Harvey has gone viral. It turns out, it's a fake image.