Hurricane Harvey is currently off the coast of Texas and is a Category 2. Harvey is expected to strengthen to a Category 3 by the time it makes landfall in Corpus Christi in the early morning hours on Saturday.

According to CNN, Harvey is currently about 140 miles off the Texas coast.

“All signs are pointing to Harvey likely stalling over Texas for at least a few days. Thus, there will be many areas that receive 10 to 25 inches of rain…Harvey is expected to bring a dangerous combination of heavy rains and storm-surge flooding to Texas this week and into the weekend,” reports TWC News.

Here is what you can expect in Dallas, Texas:

CURRENT WEATHER: It is mostly cloudy in Dallas today, the current high is 89 degrees.

WEATHER FORECAST FOR FRIDAY, AUGUST 25: According to Accuweather, Dallas will experience some heavy clouds building in this afternoon, with a thunderstorm possible.

WATCHES & WARNINGS: There are currently no watches or warnings in the Dallas area. The Dallas Observer reports that areas in North Texas may see some scattered showers, but there should not be any major impact from the storm.

“North Texas should only expect some breezy conditions, along with the potential for some scattered showers over the weekend, the NWS says. Weather oracle Pete Delkus of WFAA-TV (Channel 8) said Thursday afternoon that the majority of North Texas ‘will not be affected by Harvey.'”

PATH & MAP:  Below is a map of Hurricane Harvey’s projected path.

D‌allas has been preparing to take in evacuees from the coast. According to the Dallas Observer, several recreation centers in the area have been set up as shelters. However, the state has not yet requested help from the city. Hospitals in the Dallas/Fort Worth areas have prepared to take in patients from coastal areas, as patients were forced to evacuate due to Harvey. 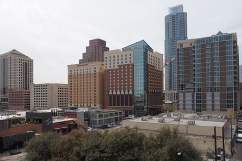