If you’re evacuating from Corpus Christi, Port A, or Aransas pass, here’s an evacuation map for your region, provided by the Texas Department of Transportation.

I-37 is the most common evacuation route from Corpus to San Antonio, but many people have noted that the roads are already packed. Expect the trip to take an extra long amount of time, at least double as long as it would normally take, but possibly longer. To help ease traffic, the evacuation lane of northbound I-37 has been opened.

To aid public, TxDOT opening evacuation lane on I-37 NB from Corpus Christi to San Antonio. This is not contraflow. It is added lane NB only

However, some Corpus Christi residents are choosing alternative routes for evacuating. You’ll likely experience less traffic, for example, if you go south and head to Laredo or McAllen. You can check Google Maps to see what the traffic delays are looking like before you head out, so you can pick the best route. Or check out KRISTV’s real-time traffic updates here.

If you’re planning to leave, the sooner the better. Although the hurricane is currently expected to make landfall sometime on late Friday night or early Saturday morning, rain and winds will be felt much earlier than that.

Rapidly deteriorating conditions from #Harvey will begin along TX coast during the day Friday – NHCpic.twitter.com/BNTcucPV7u

Here is the expected storm surge for Harvey, as of Thursday night:

Residents of Corpus Christi are being urged to evacuate, especially in low-lying areas. In Corpus, that includes ZIP codes 78418 and 78373 (both on the Island), and 78402, 78418 (Flour Bluff) and 78419. Here’s a message from the City of Corpus Christi’s official Twitter page explaining this in more detail:

As of 9:30 p.m. Thursday, the following evacuations in Texas had been declared.

By the way, if you don’t have a place to stay, AirBNB is offering free rentals for evacuees. 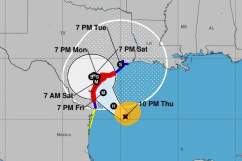