As of 9:30 p.m. on Thursday, the following evacuations in Texas had been declared.

These evacuations can change frequently, so be sure to check your local weather station for the latest updates.

If you’re wanting to get a safe distance from the storm, here’s a map from the Texas Department of Transportation showing possible evacuation routes from the Houston and Galveston regions. See more maps here.

Before leaving, check with Google Maps for the latest traffic you’ll encounter. Remember: evacuating often leads to a much longer travel time than normal. So if you’re planning to leave, it’s far better to do so sooner rather than later

Read more about the forecast for Houston in Heavy’s story below: 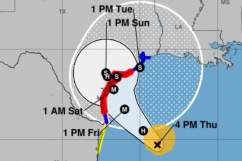 Loading more stories
wpDiscuz
0
0
Would love your thoughts, please comment.x
()
x
| Reply
If you're leaving the Houston or Galveston area, here is a map showing the recommended evacuation routes.